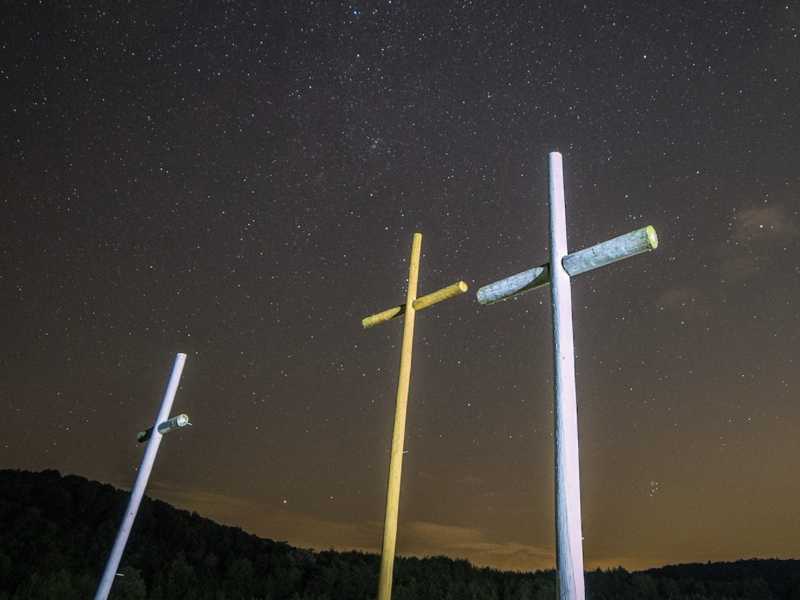 Then the soldiers of the governor took Jesus into the governor’s headquarters, and they gathered the whole battalion before him. And they stripped him and put a scarlet robe on him, and twisting together a crown of thorns, they put it on his head and put a reed in his right hand. And kneeling before him, they mocked him, saying, “Hail, King of the Jews!” And they spit on him and took the reed and struck him on the head. And when they had mocked him, they stripped him of the robe and put his own clothes on him and led him away to crucify him.

And when they came to a place called Golgotha (which means Place of a Skull), they offered him wine to drink, mixed with gall, but when he tasted it, he would not drink it. And when they had crucified him, they divided his garments among them by casting lots. They they sat down and kept watch over him there. And over his head they put the charge against him, which read, “This is Jesus, the King of the Jews.”

Now from the sixth hour there was darkness over all the land until the ninth hour. And about the ninth hour Jesus cried out, “Eli, Eli, lema sabachthani?” that is, “My God, my God, why have you forsaken me?” And some of the bystanders, hearing it, said, “This man is calling Elijah.” And one of them at once ran and took a sponge, filled it with sour wine, and put it on a reed and gave it to him to drink. But the others said, “Wait, let us see whether Elijah will come to save him.” And Jesus cried out again with a loud voice and yielded up his spirit.

On Friday, we recall Joseph’s words to his brothers who sold him into slavery, “As for you, you meant evil against me, but God meant it for good, to bring it about that many people should be kept alive, as they are today” (Gen 50:20). Joseph notes that people may intend and commit evil, yet God is never out of control. That’s why we call it “Good” Friday. Because while the crowds, Judas, the Sanhedrin, Pilate, Herod — and you and I — meant evil against Jesus, God meant this suffering and death for good, to bring about the salvation of many people.

Victory and celebration are right around the corner, but not without passing through the darkness. Jesus was betrayed by one of his disciples, denied three times by another, and deserted by the rest. He was sped through an unjust trial, spat on, mocked, and beaten before they led him away to a torturous and excruciating death; Jesus died after six hours on a cross (roughly 9am—3pm). Today evil reached new heights, as a sinless man — the Author of Life, the very Son of God — was killed by the world he came to save. And as the world’s sin was placed on Jesus, he bore all the wrath of God, being somehow separated from his Father for the first time.

Never before was there (and never again will there be) a day marked by more evil, sadness, and suffering. Today we mourn our sin, its effects, and what Jesus endured to atone for it.

Catch up on the full Easter Devotional Series here.

Do you want access to daily audio devotionals and Bible studies led by Kirk Cameron? Sign up to join The Campfire here.