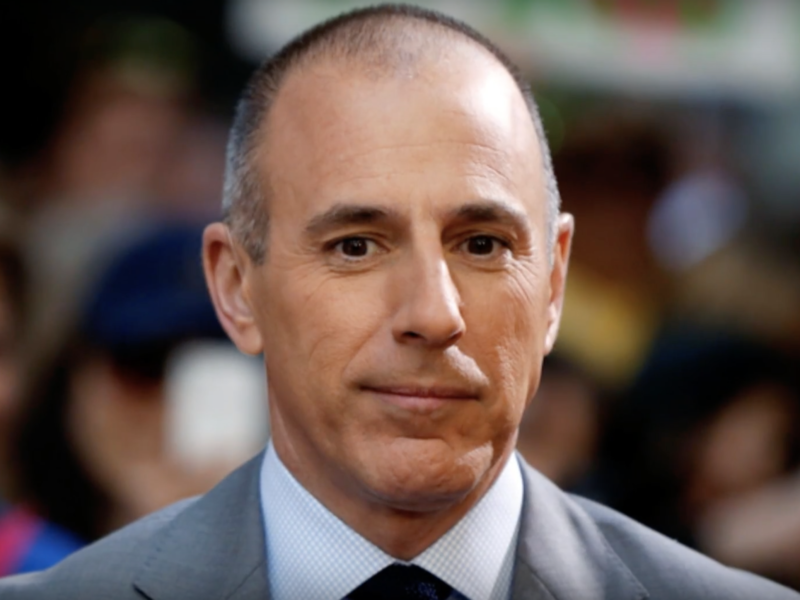 Matt Lauer has been a fixture on American television for more than two decades. He began his career at NBC News as a news anchor on the Today show. In 1998, he became co-anchor of that program and has continued in that capacity for nearly twenty years.

Lauer has co-hosted the opening ceremonies of several Olympic Games. He has appeared on numerous other television shows and has interviewed presidential candidates and global celebrities. He has been one of the most recognizable and successful figures in American culture.

This morning, NBC News announced that he had been fired for “inappropriate sexual behavior.” NBC News Chairman Andy Lack released a statement to his employees that begins:

“On Monday night, we received a detailed complaint from a colleague about inappropriate sexual behavior in the workplace by Matt Lauer. It represented, after serious review, a clear violation of our company’s standards. As a result, we’ve decided to terminate his employment. While it is the first complaint about his behavior in the over twenty years he’s been at NBC News, we were also presented with reason to believe this may not have been an isolated incident.”

Lauer’s Today show co-anchors Savannah Guthrie and Hoda Kotb announced his firing at the beginning of this morning’s broadcast. Near tears, Guthrie said, “All we can say is we are heartbroken; I’m heartbroken.”

She described Lauer as “a dear, dear friend” and added that she was “heartbroken for the brave colleague who came forward to tell her story.” She continued, “How do you reconcile your love for someone with the revelation that they have behaved badly?”

As you discuss this developing story with friends and colleagues today, please remember three biblical principles.

Jesus warned us, “Nothing is hidden that will not be made manifest, nor is anything secret that will not be known and come to light” (Luke 8:17). He added, “Whatever you have said in the dark shall be heard in the light, and what you have whispered in private rooms shall be proclaimed on the housetops” (Luke 12:3).

His warning needs continual emphasis because we typically think it doesn’t apply to us. When we are tempted with private immorality, the tempter wants us to believe that such sin will remain private. No one will know or be hurt, he whispers in our ear.

Read this: If you want to see a lasting change in yourself

Think about all the powerful men whose personal sins have been exposed in recent weeks. Sitting congressmen, movie executives, business tycoons—if anyone had the power and resources to hide their immorality, they did.

Reputation is built in a lifetime but damaged in a moment.

King David was the most successful and revered man in his nation. He led his people to unprecedented levels of security and prosperity. He was famous for his spiritual wisdom and insight.

But a single day’s sin with Bathsheba changed his story forever.

A trusted counselor once told me that Satan is a great economist. He loves to throw a single rock into the lake and watch the ripples touch every shore. He is content to watch us build our lives and public reputation day by day, knowing that the higher we climb the ladder, the farther we can fall.

If you’re harboring private sin and think that you are safe because it is not yet known, think again. Perhaps the enemy is biding his time, waiting until public disclosure will bring even greater shame to your family and witness.

We are to learn from the failures of others.

Matt Lauer is making global headlines this morning. It is appropriate for us to condemn the immorality he is accused of committing.

But we must also admit that we are also sinners. Scripture is blunt: “All have sinned and fall short of the glory of God” (Romans 3:23). I have not committed Matt Lauer’s sin, but I have committed others.

It is important for Christians to strike the right balance between accountability and humility. We are “ambassadors for Christ, God making his appeal through us” (2 Corinthians 5:20). We are called to call others to repent of their sins and turn to Christ for forgiveness and grace.

But we must do so while seeking the help of God’s sanctifying Spirit. “Let anyone who thinks he stands take heed lest he fall” (1 Corinthians 10:12).

We are beggars telling beggars where we found bread.

I am praying that today’s announcement will become a tipping point for our culture. We desperately need moral and spiritual awakening. As you step into your day, ask the Lord to help you be salt and light by the power of his Spirit (Matthew 5:13–16).

Let’s choose all three today, to the glory of God.

Now read this: This completely changed my prayer life