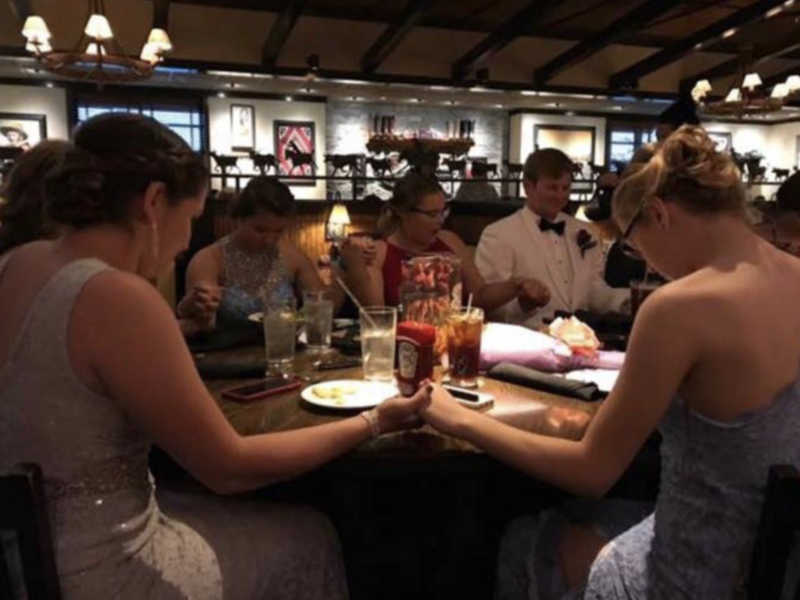 Let’s start with a simple question: Can you spot what’s wrong with this picture of a group of praying teens?

It may seem harmless, but there’s a lot of people that have a problem with it. See, the picture was posted by a California journalist after it was sent to him by one of the pictured teen’s parents. She sent it to point out that in a culture where young people are making some poor choices, there are those that are making good ones.

“I want to share a picture of my daughter and her friends from prom night,” Noelle Smith wrote to KTVU journalist Frank Somerville. “Now with the stories today about teenagers and tide pods and condoms gathering headlines—this picture speaks for itself.”

Looking for help raising teens who aren’t addicted to social media? There’s now a resource for that.

“So impressed with these young people on their prom date at Longhorn,” she added. “They all said Grace before eating and were all well behaved.”

Sommerville agreed, so much so that he posted the picture on his Facebook page:

“So impressed with these young people on their prom date at Longhorn.They all said Grace before eating and were all…

But here’s the thing: A LOT of people had a problem with it and some lost their minds.

Fox News and Faithwire pointed out some of the hate that flooded in as a result of the picture:

Sommerville, however, wasn’t having any of it. He responded:

“I’m honestly surprised by some of these comments.. i wasn’t trying to imply that you have to be a christian to be a good person.. what i see from these kids is that they are respectful… that they are humbled… and that they are appreciative for what they have. … i could care less whether they are religious…. but by saying grace it shows me that they have those qualities.. and those are the qualities… regardless of whether you believe in god … that i admire.”

According to one the kids’ grandmother, one of the girls pictured “is an honor roll student, had taken AP classes for 2 years, plays softball and soccer and after graduation will be going into the [Air Force].”

Seems like the “good kids” label is more than warranted, don’t you think?

Want your child to learn proper online habits? Kirk Cameron has a new course for that.