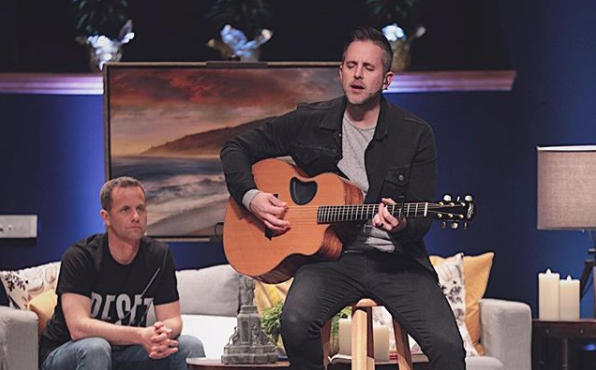 When Grammy-nominated singer Matt Hammit opened up his Twitter feed recently, he was shocked by what he saw. There, right in front of his eyes, were some of the most appalling responses from men angry over the new anti-abortion bills in states like Alabama and Georgia. Those responses and the conversation he saw unfolding affected him deeply.

He explains in a recent op-ed he wrote:

These men spoke with passion about their dreams, goals and career aspirations that would have been stalled, even derailed by the birth of an unwanted child during an immature season of their life. One man wrote that he owed his life to his mother’s right to choose, confessing gratitude that his elder sibling had been aborted, because he “most assuredly” wouldn’t be alive today.

Hammit, the former lead singer of the band Sanctus Real and who tours with Kirk Cameron as part of Cameron’s Living Room Rest marriage and parenting event, goes on: “‘Has the world gone mad?’ I thought, as I watched people devour each other in an exceptionally vile form and fashion, even in response to most cordial opposition at times.”

“[M]y heart was broken by the precious moments of life I saw wasted on the demonizing and dividing that seemed to overrun any trace of healthy discussion about the important issue at hand,” he continues.” We were all children in our mothers’ wombs once, with no voice. How might we have felt about the way we are using the voices that we have now?”

That led to anger, and even thoughts of responding. But then he thought better of it. And instead decided to respond by affirming what he sees around him in his wife and children:

Not a day goes by that I don’t dream and earnestly pray about how a man like me should be using his voice in the world to shed light in dark places. How can I go beyond good intentions and live out redeeming love?

As for today, I know what this man’s response will be to what’s discouraging me in the world. I’m going to look, my wife, Sarah, in her eyes and describe to her why she’s my hero. I’m going to hug my four children a little longer and affirm their worth in this world.

I’m going tell them “thank you” for stalling some of my immature plans, derailing a few of my self-centered dreams and showing me how small some of my biggest aspirations once were, in light of now having them in my life.

He didn’t stop there. To read the rest of what he decided to affirm, you can head on over and read his full op-ed here.