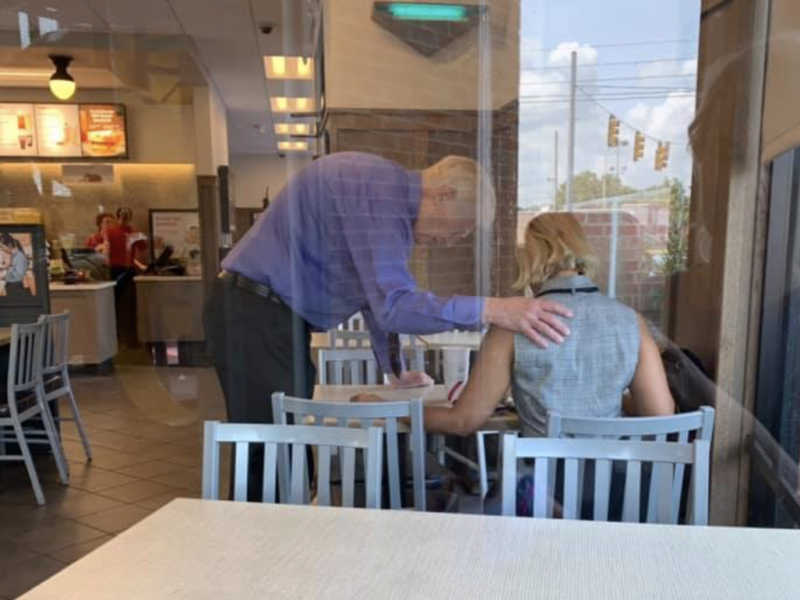 A photographer has captured the touching moment when a Chick-fil-A restaurant worker offered to pray for a customer.

Brittany Calden was driving along was at the Chick-fil-A on Highway 72 in Madison, Alabama, when she noticed well-known employee Stephen Spray conversing with customers.

This is Chick-fil-A Madison (AL) 😭😭Praying for her in between wiping tables. Like, y’all. ❤️

Then, in a wonderful moment of faith, Spray leaned over, put his hand on the woman’s shoulder and could be seen with his eyes closed in prayer. Calden immediately snapped a picture.

“As a photographer, it was instinctual for me to document this moment,” Calden told FOX 5. “I find myself always searching for things that move me, and this was one of those instances.”

Speaking to Calden after he was done talking with the woman, Spray said that the “Spirit led him to pray for her.”

“That’s not unusual,” Spray added. “I work at a place where if I’m led to pray for someone, I’m able to do that and I’ll do it right on the spot. People need prayer, encouragement, and love. That’s what we try to do here.”

Calden noted that Steve is a long-time staff member who has endeared himself to customers with his kindheartedness.

“Mr. Steve never fails to walk up to your table and ask how your day is going and always tried to make your day better than it was before you saw him,” she explained.

That, the photographer noted, is just part of Chick-fil-A’s friendly and faith-filled value set in action — and she has experienced it first hand!

“As soon as we enter we are greeted by our names, it’s seriously unreal,” Calden explained. “They hold my baby when my hands are full and go out of their way to make us feel good. The other day we were leaving and an employee ran for the door to hug my daughter before she could leave. They don’t do what they do for recognition. These employees have hearts that are led by Jesus and its evident every time we enter their restaurant.”

Calden added that Spray had no idea his picture was being taken. That’s just the person he is, she noted, “and because of who he represents, Christ.”

Openly led in line with a strong Christian ethos, Chick-fil-A has gained a reputation for retaining some pretty wonderful staff who consistently go above and beyond to serve the public well. Last month, a drive-thru employee jumped out of the window to help save the life of a choking child.

There are many, many more examples of situations where the restaurant’s staff have excelled themselves. Check some out below!