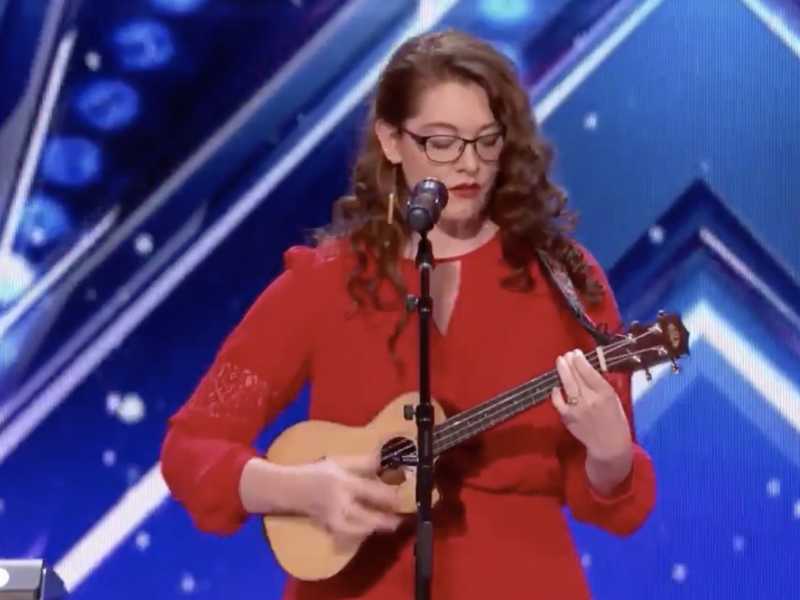 It’s been two years since Mandy Harvey absolutely stunned the world with her viral “America’s Got Talent” performance — a display that left the typically harsh Simon Cowell in awe. Harvey’s vocals were on-point, but that wasn’t the only reason Cowell, his fellow judges, and the studio audience erupted in applause and a standing ovation.

The accolades came after Harvey revealed just before her performance that she’s deaf, having lost her hearing about 10 years prior at the age of 18. It was a traumatic experience, as she could no longer hear the music she had grown to love.

READ ALSO: 5 Christian Singers Who Are Transforming Lives Through Music

“I lost the ability to hear the piano, and that’s when I started to crack,” she recently told “The Pure Flix Podcast.”

Listen to Harvey explain how she lost her hearing, nearly gave up hope — and then overcame the odds:

Harvey, who is currently preparing to headline the Hearing the Call concert series, explained that she was born with Ehlers-Danlos syndrome type 3, a connective tissue disorder, that led to her hearing loss. But it was after a series of six major leg surgeries when she was in high school that her problems intensified.

“My body attacked itself, and so over a period of nine months I lost the ability to hear,” she said. “The nerves in my brain kind of fried themselves.”

Despite always struggling with hearing, Harvey soon found herself unable to understand people talking — and no longer able to hear music.

She got hearing aids, which she aptly nicknamed “Hope.” Soon, those, too, no longer offered the assistance she needed.

“Everything was just a description of what used to be,” Harvey said.

As a Christian, she struggled to understand why she was facing such a life-altering situation. In addition to hearing loss, Harvey was also dropped from the vocal music education program at Colorado State University.

“Having my world be swallowed seemed to happen overnight, but as far as my faith goes — you start out with the typical things,” she said. “I had prayed every prayer you can think of.”

Harvey pushed music to the side and almost gave up on it entirely. But she said she was continuously encouraged by people who she said, “refused to give up on me when I gave up on myself.”

Then, one day everything changed when Harvey’s dad convinced her to play the guitar with him.

“I was strumming the guitar and I could feel the vibrations of the instrument,” Harvey said.

And that’s when she realized that she could rediscover her music through the vibrations. Harvey many times performs now with her shoes off so she can feel the beat and tempo of the music through the floor — and her singing voice is absolutely stunning.

In all of this, Harvey discovered freedom and confidence.

“I was singing with such freedom, because I just didn’t care,” she said. “I have always been scared to sing in front of other people.”

Her story became international news after she decided to audition for “America’s Got Talent” — something she said she never would have done before. But her newfound confidence propelled her forward.

“I wanted to … encourage people and show that it’s okay to fail,” she said. “I wanted to show a different side of what a disability looked like.”

And that she did. Harvey’s performance immediately went viral, with people all over the world learning about her inspirational story of faith, hope and perseverance in the midst of uncertainty. Today, she’s performing and sharing her talents with the masses.

READ ALSO: He Once Said ‘I’ll Never Be a Christian,’ But God Had Other Plans

Harvey also has plenty to say about God and her faith.

“God is not a bully with a stick … it’s not some kind of cosmic joke. He’s a dad watching his kids suffer and he’s crying with you,” she said. “Bad things happen … you live on Earth. It’s a broken place. It’s full of muck and mess and people who have freewill who make horrible decisions.”

In the end, Harvey encouraged people to focus on their faith walk, no matter what unfolds.

“It’s not our job to understand what tomorrow’s going to look like,” she said. “It’s our job to keep walking the path of faith, regardless of what happens.”

If you want to catch Harvey’s live music, consider attending the Hearing the Call concert series, which kicked off in Fort Worth, Texas, on March 26, with additional concerts in Palo Alto, California, on July 24 and Lakewood, Colorado on July 26.

More shows are also slated for later this year. Hearing the Call is a non-profit that works to “bring the gift of hearing to the impoverished afflicted in the United States and other countries around the world.” Find out more here.