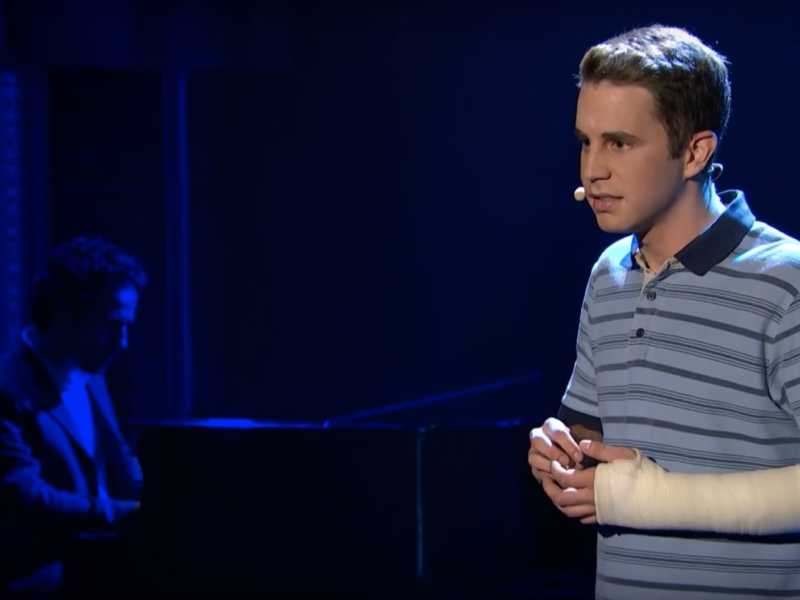 We once were lost but now we’ve been found. Tragically, a growing number don’t believe this to be true. The latest Broadway sensation “Dear Evan Hansen” depicts this heartbreaking and increasingly prevalent reality by following high school senior Evan Hansen as he deals with the suicide of his supposedly close friend Connor. Suicide offers individuals the chance to disappear, but Evan Hansen movingly reminds audiences they will be found and have not been forgotten.

The nine-time Tony-nominated show stars Ben Platt, and his commitment to the role is reflected in his moving performance. Platt lost thirty pounds to play the part of an anxiety ridden teen. Throughout the show, Ben’s facial tics and the nervous twitching of his fingers makes you believe that he is not only dealing with the loss of his friend, but he himself has contemplated suicide. He sings through tears, which Neil Patrick Harris comments in the Times: “Think of how hard that is to do, to sing an entire song and cry simultaneously. I couldn’t do it. I physically couldn’t do it. I’d sound like a goat.”

The show’s title comes from his therapist’s advice. The therapist encourages Evan to write encouraging letters to himself, which the audience is privy to because of the set design. A variety of multi-sized projections cover the stage, displaying everything from Microsoft Word documents to Tweets to Facebook feeds. After writing and printing one letter after a hard day in the computer lab, Connor takes it from the printer before Evan can retrieve it. The letter reads:

Turns out this wasn’t an amazing day after all. This isn’t going to be an amazing week or an amazing year, because why would it be? I know, because there’s Zoe, and all my hope is pinned on Zoe, who I don’t even know, and doesn’t know me. Maybe if I could just talk to her. Maybe nothing would be different at all. I wish everything was different. I wish I was part of something. I wish that anything I said mattered to anyone. I mean face it, would anyone notice if I just disappeared tomorrow?

Your most best, and dearest friend, Me

Zoe is both Evan’s crush and Connor’s little sister. After aggressively confronting Evan, Connor storms out and the audience discovers moments later that he has committed suicide. However, his parents find the note with Connor and assume it was Connor who wrote the letter to Evan. They believed their son to be a drug user and bully with no friends. But in the note, they discover a supposed new side of their son that wants to change and has a friend in Evan. In this moment, the once lonely Evan becomes an internet sensation as he champions suicide prevention in memory of his supposedly close and now deceased friend Connor.

The show in and of itself is equally beautiful and moving. I have never heard as many sniffles and seen as many glistening tears falling from faces in the darkness of a theatre. But this may be because the show is playing out all too frequently off the stage.

After a period of a consistent decline in suicide rates in the United States from 1986 through 1999, suicide rates have increased almost steadily from 1999 through 2014. The suicide rate has risen by a quarter, to 13 per 100,000 people in 2014 from 10.5 in 1999. The rate is at the highest level in nearly 30 years. Suicide among adolescents and young adults is increasing and among the leading causes of death for those demographic groups. More than ninety percent of those who commit suicide suffered from a significant psychiatric illness at the time of their death.

The statistics indicate suicide’s alarming prevalence, and the culture reveals its fascination of it and struggle with it. Rap artist Logic recently released his latest single entitled 1-800-273-8255. The title of the song is the number of the national suicide hotline. In the song, Logic gives voice to the internal monologue of someone struggling with suicidal thoughts but couples this with rationales as to why suicide is not a good option. And then there is the television hit “13 Reasons Why.” This Netflix hit centers around the suicide of Hannah and the thirteen reasons why she chose to commit suicide.

Both those who consider suicide and lose someone to it often struggle with the presence of God and his goodness in the midst of such pain. However, in the Scriptures, numerous characters suffer from thoughts similar to those who consider suicide. Jeremiah likened God to an unreliable stream in the midst of his hurt (Jeremiah 15:18). Concerning suicide, David went so far as to say that “my bones are troubled (Psalm 6:2–3).”

A number of characters in the biblical narrative suffered through suicidal symptoms but ultimately decided that, though they may not see the hand of God in their lives, they could trust his heart with their lives. God walks with us through the valley of the shadow of death (Psalm 23:4). Jesus weeps as we weep (John 11:35). He experienced every pain we feel (Hebrews 4:15). He is not absent in our sufferings but is sympathetically present with us in the sufferings (Psalm 34:18, Acts 16:25–26).

Evan Hansen sings about the universal truth that sometimes “words fail” when trying to describe what we are experiencing. But as the Scriptures remind us, our God does not. His faithfulness is without limit and his love is beyond comprehension. “You will be found” is one of the more memorable songs of the show and one of the most beautiful qualities of amazing grace.

Now read: What if obedience doesn’t pay off?

This post originally appeared on DenisonForum.org and was republished with permission.