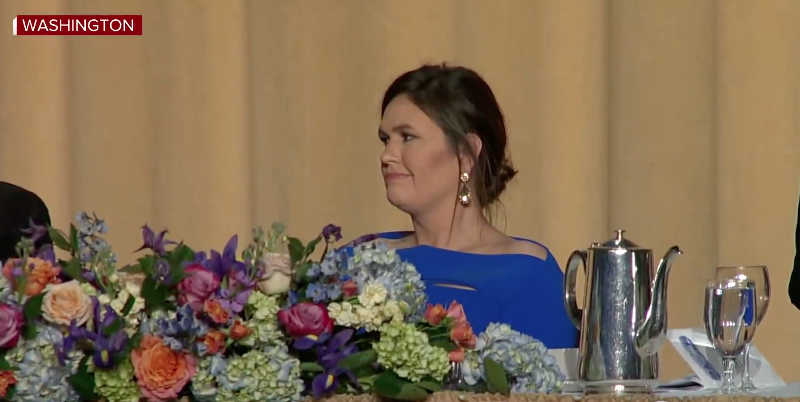 This weekend marked the annual White House Correspondent’s Dinner. So-called comedian Michelle Wolf was the person selected to do the annual roast of the Washington insiders, but many are saying she went too far. Nothing captures that sentiment more than the “jokes” hurled at Press Secretary Sarah Huckabee Sanders, jokes so bad they’re being called “vile.”

“The press who cover the White House in Washington should be the best of the best. But what took place at the White House Correspondents’ Dinner last night was shameful,” prominent evangelical Franklin Graham wrote on Facebook regarding the evening. “I don’t blame President Donald J. Trump for not attending! Who would want to sit there and listen to the vile filth spewing out of Michelle Wolf’s mouth?”

“This was way more than mean-spirited and antagonistic. Her targeting of White House Press Secretary Sarah Huckabee Sanders was uncalled for. And this is what Wolf said about Vice President Mike Pence’s position against abortion: ‘He thinks abortion is murder which, first of all, don’t knock it ’til you try it — and when you do try it, really knock it. You know, you’ve got to get that baby out of there.’ Does anyone think that is a joke? What gall!”

As Graham said, Trump did not show up. But other members of the administration did, including Huckabee Sanders. She was a prominent target of Wolf’s attacks.

We are graced with Sarah’s presence tonight. I have to say I’m a little star-struck. I love you as Aunt Lydia in The Handmaid’s Tale. Mike Pence, if you haven’t seen it, you would love it.

Every time Sarah steps up to the podium I get excited, because I’m not really sure what we’re going to get — you know, a press briefing, a bunch of lies or divided into softball teams. “It’s shirts and skins, and this time don’t be such a little [redacted], Jim Acosta!”

I actually really like Sarah. I think she’s very resourceful. She burns facts, and then she uses that ash to create a perfect smoky eye. Like maybe she’s born with it, maybe it’s lies. It’s probably lies.

That attacks drew the ire of many, including the president and the mainstream media. And many actually praised Huckabee Sanders for being so resolute during the attacks:

That @PressSec sat and absorbed intense criticism of her physical appearance, her job performance, and so forth, instead of walking out, on national television, was impressive.

I think @PressSec unflinching gaze at Michelle Wolf was the most interesting thing about the event, which is intended to honor the First Amendment but in fact mocked the values of civil society so thoroughly as to stun even the cynical reporters. The honest ones will admit it.

The White House Correspondents’ Dinner was a failure last year, but this year was an embarrassment to everyone associated with it. The filthy “comedian” totally bombed (couldn’t even deliver her lines-much like the Seth Meyers weak performance). Put Dinner to rest, or start over!

The White House Correspondents’ Dinner is DEAD as we know it. This was a total disaster and an embarrassment to our great Country and all that it stands for. FAKE NEWS is alive and well and beautifully represented on Saturday night!

The head of the White House Correspondents Association admitted the monologue was “not in the spirit” of the dinner, but did not extend an apology:

In a statement, @whca president Margaret Talev said that Michelle Wolf's monologue was "not in the spirit" of the #WHCD's mission. https://t.co/96R10qjYwS

You can watch watch Wolf’s attacks on Huckabee Sanders here. But be warned, there is one curse word used.

What do you think of the dinner and the attacks?