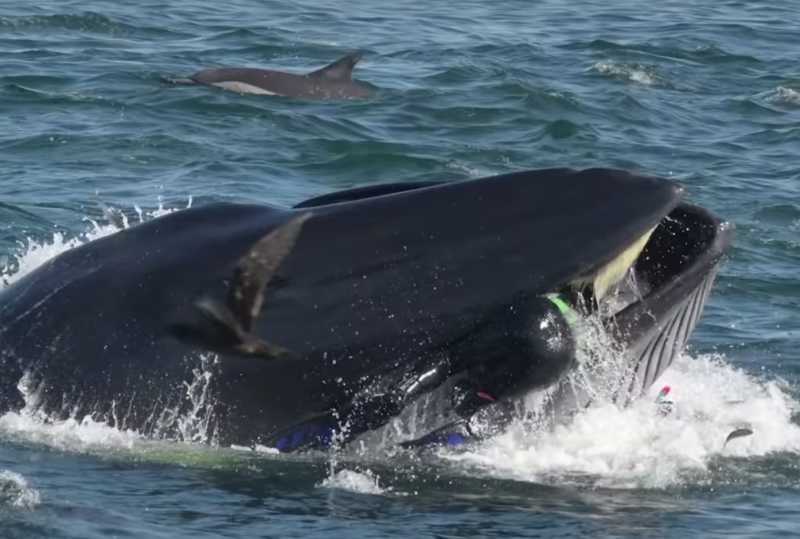 For almost fifteen years, South African diver Rainer Schimpf has been documenting an extraordinary ecological phenomenon called the “sardine run,” when billions of fish spawn in the cool waters of the Agulhas Bank and move northward along the east coast of South Africa, bringing with them a plethora of hungry predators seeking after an easy meal. This year, however, Schimpf almost became dinner for one enormous Bryde’s Whale.

In a scene reminiscent of the Biblical story of Jonah, Schimpf, 51, found himself gobbled up by the vast mammal in a matter of seconds.

“I was trying to get a shot of a shark,” he explained to Barcroft TV. “It all happened very fast. The next moment, it got dark and I felt some pressure on my hip. Once I felt the pressure, I instantly knew that the whale had grabbed me.”

The diver added that there was “no time for fear” in the midst of such an adrenaline-fueled, primal fight for his life.

“Nothing can prepare you for when you end up inside the whale,” he said, adding that, “pure instinct” was required in order to survive.

Incredibly, the incident was snapped by a photographer, who was onboard a nearby vessel, documenting the trip.

The experienced diver explained how, at the moment he was grabbed by the enormous fish, he held his breath, fearful that the huge beast would drag him down to the depths. “My thought was now he is going to dive down and release me much deeper in the ocean,” he said.

But the whale decided not to swallow Rainer, as was the case in the tale of Jonah. Instead, after a few moments sizing him up, it decided to spit him out. “The next moment, I felt that the whale was turning and the pressure was released,” Schimpf recalled. “Then I was washed out of the mouth and came back up onto the surface, where surely I wasn’t looking too clever!”

“I guess, for the whale it was also scary,” laughed witness Claudia Weber-Gebert.

Joking aside, with the Bryde’s Whale known to grow to a length of 55 feet, Schimpf was extremely lucky to escape without harm.

“Once you’re grabbed by something that’s 15 tons heavy and very fast in the water,” Rainer told Sky News, “you realize you’re actually only that small in the middle of the ocean.”

In the Biblical story, Jonah in instructed by God to travel to Nineveh with an urgent message — to warn them of the impending wrath of God. However, Jonah disobeys almighty God and boards a ship to Tarshish instead. As a result, he falls into a deep depression and, in the midst of a huge storm, he requests that the ship’s crew toss him overboard to alleviate the weather.

“Pick me up and throw me into the sea,” Jonah said in the famous Biblical narrative, “and it will become calm. I know that it is my fault that this great storm has come upon you.”

After plunging to the depths, he is swallowed up by a whale and, after agreeing to go to Nineveh after all, and repenting of his disobedience, Jonah is later spit out on the shore.

He goes on to successfully warn the city of God’s coming judgment, and Nineveh’s people subsequently turn from their wicked ways.

Do you want to join a faith-based community and get weekly videos from Kirk Cameron? Join The Campfire today!