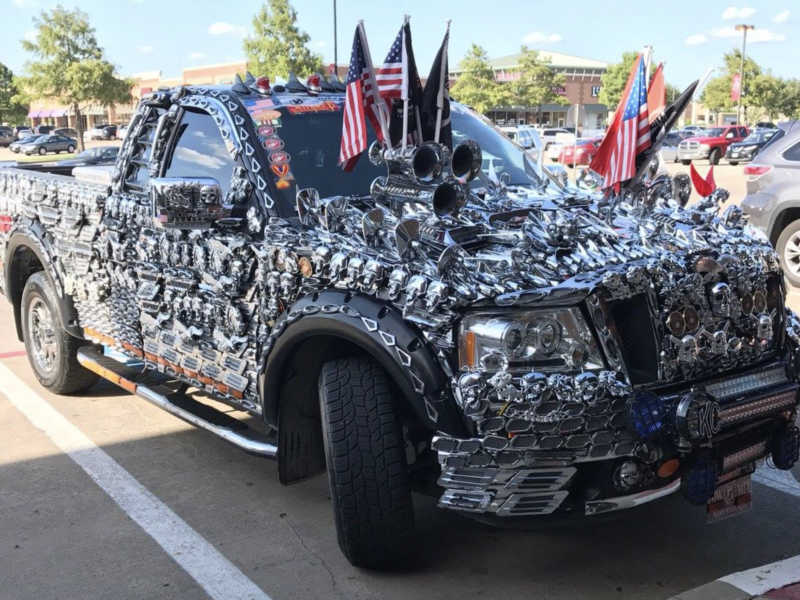 I remember the first day I saw the truck. How can you not? It’s unforgettable.

We had just moved into our new neighborhood in a suburb of Dallas. I was at the auto parts store picking up some things so that I could change the oil on my own truck. As I opened my door, a gleam of silver appeared on the road, rolling from my right to the left as it approached the intersection.

“What in the world is that?” I said it loud. What “it” was is hard describe. And its core, it was a truck. A Ford F-150. I think. It was covered hood to tailgate in silver medallions. Many were skulls. But there were also air horns, eagles, and a whole lot of flags. American flags. Texas flags. and POW-MIA flags.

But even that doesn’t do it justice. It’s better to just let you see it yourself:

Have you seen this truck? It's been spotted in The Colony and Plano. Our reporter Hannah Davis wants to know the story! (Photo Credit: Plano Health & Fitness)

See what I mean?

At the time, I made it my mission to find out the story behind the truck. Because with a get-up like that, there has to be a story. But despite seeing it several more times over the last six months, I was never in a position to talk to the man who was driving it. Luckily, (as you see above), the vehicle caught the attention of the local news. And they got to the bottom of it.

The truck is the work of a local veteran named Everett Floyd. He served two tours as a Marine in Vietnam. When he came back, he was floored by the lack of respect given to Vietnam vets. Instead of a hero’s welcome, they were spat on and maligned. So he has made it his mission to change that.

“They all have a meaning,” Floyd told WFAA-TV of the emblems and flags on his truck. “Some mark the men who didn’t come home.”

“It’s a one-man parade is what it is,” a fellow vet told the news outlet. That may be the best way to describe it.