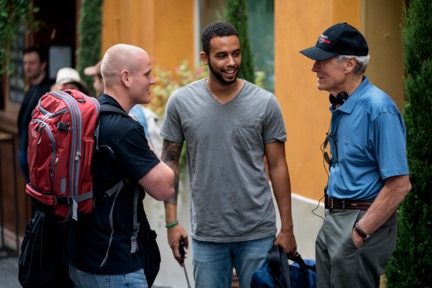 In August 2015, childhood friends Anthony Sadler, Alek Skarlatos, and Spencer Stone were on a train from Brussels to Paris while traveling abroad in Europe. But it was no ordinary train ride. Hidden among the passengers were three terrorists bent on making the train the focus of the next big jihadi target.

Sadler, Skarlatos, and Stone were in the middle of it all, and they had a decision to make: run and hide, or take action. They chose to do something.

Now, their story is being given the Hollywood treatment by none other than Clint Eastwood in the new film, “The 15:17 to Paris,” which releases this weekend. The movie, however, isn’t your ordinary blockbuster. That’s because Sadler, Skarlatos, and Stone (the latter two having served in the armed forces) are not only the subjects of the film, they actually play themselves in the movie.

Recently, TheCourage had a chance to catch up with the heroes and talk about that day and what it was like working with Eastwood. But more importantly, the trio talked about how their faith played a major role in saving hundreds of people that day in August.

TheCourage: All three of you were raised in the church. How did this attack impact your relationship with God?

SPENCER: I was raised in a Christian home, my entire life. Went to church every Sunday with my mom, brother and sister, and Wednesday night church too. GOD for me is someone that is always there and always will have my back, whether it’s a good or bad situation. And it’s in the Bible, HE’s not going to put you through anything that you can’t handle.

That’s what I fell back on in the moment on the train. I didn’t necessarily at that second think, GOD’s got my back, but I knew it. There was an opportunity to do something good. I believe those are the times where we’re vessels to be used by HIM, to do HIS work. And it was an honor to do something that good.

ANTHONY: I’ve been going to church all my life. My dad is a pastor and my family is Christian, faith-believing, and I’ve grown up that way. As far as on the train that day, it’s divine intervention, because so many things could’ve gone the other way for us.

A calm came over us as we were falling into our different roles that day. I know where that calm comes from now that I’ve had a chance to evaluate that day.

The odds of our exact situation happening to us are too astronomical to believe that it was purely chance, especially when you look at the fact that we were thinking about staying in Amsterdam another day and we didn’t. The fact that we moved seats from coach to first class. So many different little things that are hard for even us to remember – all the different circumstances that put us there in that exact time and place. It’s too coincidental to be chance. GOD had a hand in it, because we shouldn’t be here today to be honest.

Your split-second decisions were extremely courageous. Where do you think this seemingly innate courage comes from? Afterward, were you surprised by your own reactions?

ANTHONY: We were vessels being used basically. We didn’t know why we were doing that. I don’t even know how I got the first aid kit, but somehow it was in my hands. Alek was doing his thing clearing the car. Spencer saw somebody was bleeding and crawled over there. When did we think of that? We didn’t think. We were just being used.

SPENCER:  How well everything fell into place, you would think we rehearsed it. It was pretty much like we took over the train. I never felt more calm in my entire life. I knew exactly what we should do in that moment. It almost felt like someone pushed me towards it. I knew in my mind I had to go, and something greater stood me up. I think that’s why they’re still confused about how I got up so fast. I don’t know how I got up so fast either – I’m pretty slow.

Eastwood says one of the hardest things to do is to play yourself verses hiding behind a character. What was the most challenging part of acting in a movie about yourself?

SPENCER: The dynamic that we have between the three of us is so natural and authentic because of our friendship. At the end of the day we’ll be able to look back on the movie and say that was us, and that it’s 100 percent the truth. I don’t think that’s something three strangers pretending to be us could’ve done.

ANTHONY:  I think if actors had done it, they would’ve been trying to fake a friendship and it wouldn’t have been as interesting. But I think for our story, it’s more interesting to see our dynamic, to see why we did the things we did on that day and why each person took on their different roles. The dynamic of us in real life is important to why we did what we did.

Clint and the people that work with him were extremely invested in the story and getting everything right. That’s something we really appreciated. They were constantly  checking in with us while we were shooting.

“If it didn’t happen this way, tell me and then we’ll change it.”

That made us more comfortable throughout the whole process as we tried acting for our first time. We kept thinking, “We actually do have input. He does want to get the story right.”

ALEK: You have to remember how it was on the actual day. And I don’t know about the other guys, but it would trigger an adrenaline rush in me and it made it easier to feel the same emotions that we actually felt the day on the train.

This movie is going to inspire and encourage many people across the world. What do you hope others learn from watching it?

ANTHONY:  I want people to take away exactly what it is. The fact that we’re three ordinary guys that were faced with an extraordinary, crazy situation. And the reason why we acted the way we did that day is because of our friendship, the back story matters. And then take away that they can, as people, a regular person, do something great too. To feel like things are possible that they previously didn’t think were possible.

SPENCER: I think if anything, our story shows that heroes can be ordinary people. And we all are people.

You each have been given a big platform, what do each of you hope to do with this platform in the future?

ANTHONY: We’re affirming GOD’s plan on our lives by being where we were supposed to be on the train that day, and the things that have happened since. I feel like I’m finally on the track that I’m supposed to be on. I don’t know what comes next, but I’m on the plan that’s been set for me. That’s a good feeling, I have confidence in knowing I’m going in the right direction.

I think it’s our responsibility to take this story and be responsible with it and spread it as much as we can so we don’t waste the opportunity that HE gave us. The fact that we survived the train meant we’re to spread the story and it’s meant to touch people, and we’re the three people that were chosen to do that.

SPENCER:  I’ve never felt like more in my life that I was on the path that I needed to be on at this moment.

Some of the responses have been edited for length and clarity.