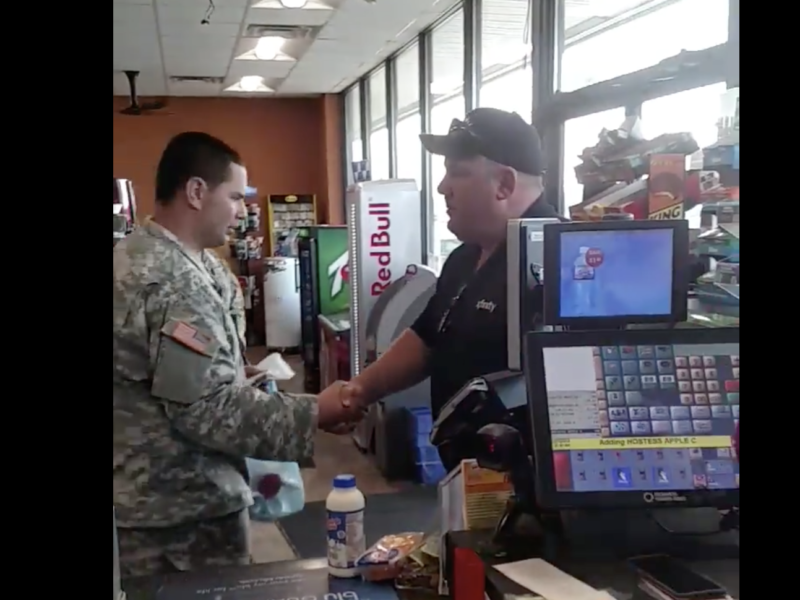 When Mike Kestermann pulled up to the AmeriStop in Greendale, Indiana, last week he probably didn’t think he would be paying a $148 tab. But when he saw who he was sharing the gas station with, he didn’t think twice.

Kestermann was just one of many customers that day. In fact, most of the customers were dressed in camouflage. That’s because a convoy of National Guard soldiers who were finishing up training at nearby Camp Atterbury. When Kestermann saw his fellow sojourners, he decided to “pay it forward” by telling the guardsman that he would take care of the bill for whatever they wanted.

“Come up here,” he can be heard saying in a video that a store clerk took of the generosity. “Get up here.”

“You are ready to head home, aren’t you?” Kestermann asked one soldier.

“This is about you today,” he told another.

It's days like this I live my job. Thank you to this gentleman for buying all the military this morning. What a great guy and thanks to all the military for their service. Bring a tear to your eyes…. AMERISTOP GREENDALE

“Our young soldiers. Our young men and women the put their lives on the line every day they are doing this,” Kestermann added. “We have to show appreciation for what they are doing.”

Darlene Davis, who captured the video of the incident, told the news outlet that the gesture was genuine.

“He didn’t want anything back from it,” she said. “He didn’t know I was videotaping at the time.”

In fact, Kestermann said he does it frequently.

“Like someone had told me, ‘You just got caught this time.'”