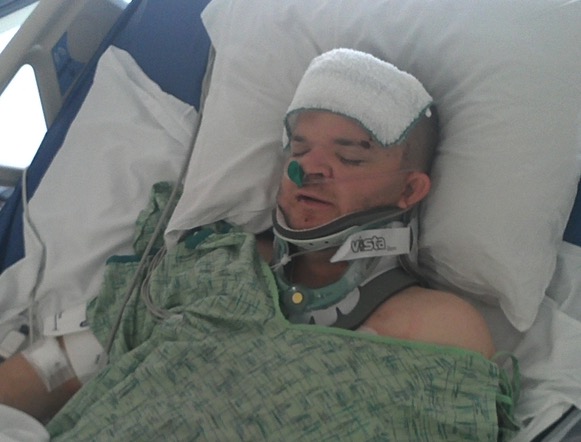 Dr. Jeff Huxford was a successful family medical doctor when a life-altering car accident changed absolutely everything. On May 3, 2012, he drove into town to pick up some items at a local hardware store, but a series of shocking events along the way sent his life on a totally different trajectory — and it all unfolded in mere seconds.

Huxford, author of the new book, “Finding Normal: An Uninvited Change, An Unexpected Outcome,” recently told “The Pure Flix Podcast” about how his near-death experience and the traumatic brain injury he suffered during the collision transformed his life and family.

“I stopped at the stop light, but a truck going the other way did not stop … [and] pushed my truck into a concrete pole,” Huxford said. “My head went through the driver’s side window and hit the pole … they had to cut me out with the jaws of life.”

The very serious accident led paramedics to transport Huxford to Chicago, where he received treatment for his injuries.

“It was a miraclethat I survived,” he said, noting that the accident left him with “a severe traumatic brain injury” — an experience that forced changes throughout his entire life.

These changes were difficult and inevitably led him on an introspective journey he could have never imagined. Hear Huxford describe his miracle survivalat the 20:30-mark:

Huxford said he was initially determined to get back to normal — back to the same exact person he was before the accident. Unfortunately, the path through such a severe traumatic brain injury is anything but seamless.

“After a brain injury a person has to find their new normal … and I didn’t really believe that at first,” he said, noting that he thought that with “enough hard work and enough time and determination” he could get back to the person he was before.

But the accident forced Huxford to retire due to his complications with traumatic brain injury, leaving behind his decade-long career as a physician.

Although the brain injury took away his ability to practice medicine, Jeff learned a multitude of wonderful truths about God and found his value and purpose rooted in Christ.

Huxford soon realized that some of the changes he faced were permanent, and that he had to truly embrace his new normal.

“This brain injury might have taken a lot from me, but it has also given me a lot,” he said, citing his Christian faithas the most profound benefit.

Despite growing up in a Christian home, Huxford said he came to a place before the accident of relative apathy — one in which his faith was relatively benign.

“I think over time I got really comfortable in my faith and it became more of a checklist type thing where I was making sure I was checking the right boxes,” he said. “It wasn’t about a relationship.”

But after Huxford’s accident, he heard a sermon that changed everything — a message about the importance of not being a “lukewarm” Christian. As Huxford listened, he came to an important realization.

“When I heard the verse this time I started seeing myself as being one of those lukewarm Christians,” Huxford said, noting that he had always known that being lukewarm is something the Bible condemns.

In the end, that sermon helped bring his faith into a truer focus, waking him up from his apathetic spiritual slumber.

“I would never wish a traumatic brain injury on a person,” he said. “But if that’s what it took for me to find Jesus and learn about Jesus in the way I needed to then I would do it all again.”

Despite Huxford’s own struggles, he has persisted, and has an inspirational word for anyone facing difficult trials: “God never promised us an easy life or a life free of trouble, but he did promise to be with us during those times.”

Read more of Huxford’s story in “Finding Normal.” And if you’re looking for other incredible overcomer stories, look no further than PureFlix.com, where you can stream uplifting documentaries and movies like Scott MacIntyre’s “I Am Hope,”among thousands of others.