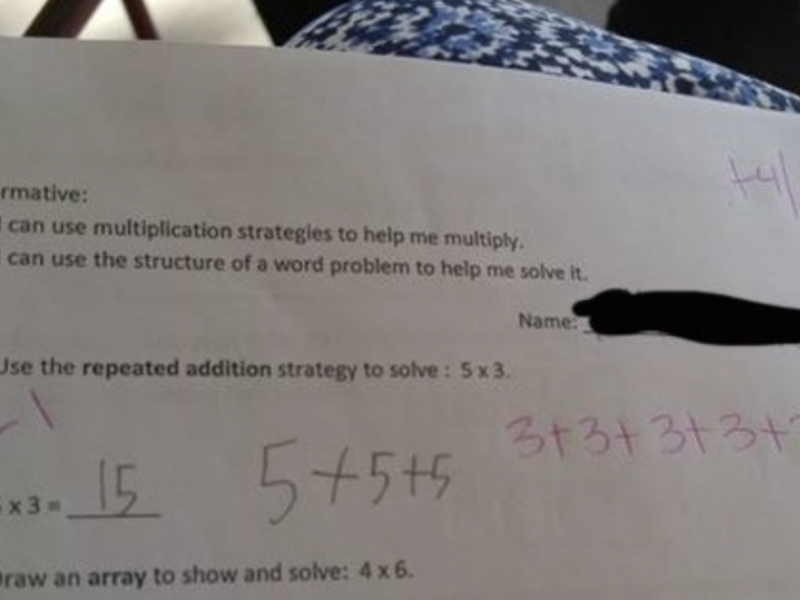 A picture of a math problem posted on the popular photo-sharing site Imgur is causing an uproar among many, parents included. If you look closely, you’ll see why it’s causing such consternation.

The picture is of a math test given to an elementary school student. The question on the test asks, “What is 5 x 3?” and it also asks that the student show his/her work using the “repeated addition strategy.”

Many people commenting on the image side with the student and believe the answer is correct.

“I can’t figure out why math is now some new phenom that people want to Change. what they’re taught now is ridiculous and will never be used in the real world,” one person wrote on Facebook.

“Today’s math is so freaking confusing, why can’t they teach it how we learned it back in the 80’s and 90’s?” said another.

But not everyone agreed. One woman said, “The teacher has graded this homework correctly. Based on the instructions, the child was to use the structure of the word problem to help solve these problems. The child missed both answers one and two which shows the child doesn’t grasp the way the problem reads to make a picture or to solve properly. They are read as —- sets of — so 5 sets of 3 or 3+3+3+3+3 . The array in problem two was also read backwards as the child should have done 4 sets of 6. They learn this in class… it is just something the teacher will revisit during group and individual instruction.”

What do you think? Is the student right, or did they technically not follow directions? Is this just another example of “common core” math run amok?