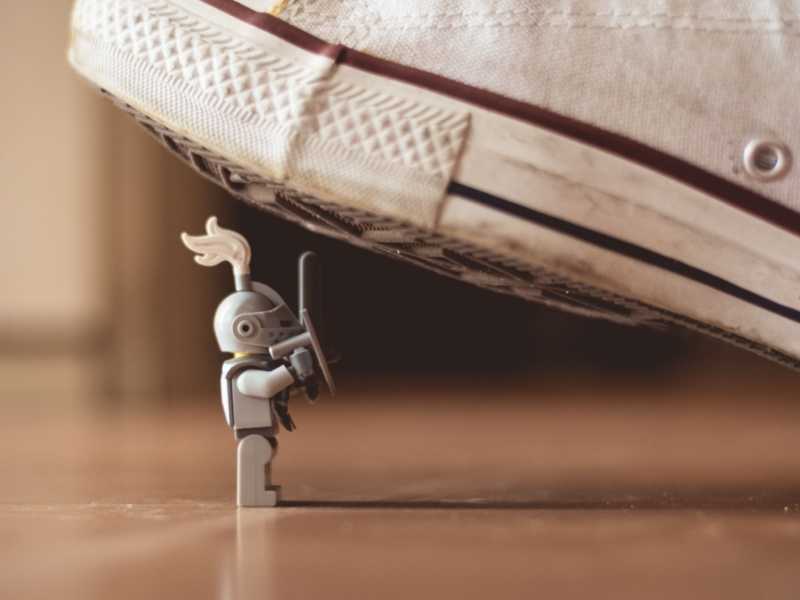 I had every reason to be ornery.

I was supposed to go on a hunting trip on Saturday afternoon, but got rained out. So I decided to clean out my garage in what felt like 120% humidity. When that got to be unbearable, I decided to run to the gas station for a break and a soda.

That’s when it happened.

As I was pulling out of the station, a black car with two teenage girls was ahead of me at the stop sign. They began to pull out into the street, but then did something strange: the car’s reverse lights came on and their vehicle started heading straight for me. I honked my horn immediately to get their attention, but by then it was too late.

Bam! (As an aside, It’s really quite incredible how loud even the smallest of fender benders are.)

We both pulled into a nearby parking lot, and as I was preparing to get out of my truck and assess the damage, I could see the two teenage girls were a mess. They weren’t hurt, but they were absolutely balling.

I went over to the window as the passenger rolled it down.

“Sir, we are SO SORRY!” the one girl said through tears.

And that’s when I had a decision to make: Do I become upset and tell them off, or do I show grace and stay calm?

I think 10 years ago it would have been the former. Back before the gospel of Christ had really taken strong root in my heart. Back before I began to realize how truly messed up I really am and how much I need the grace of God every second of the day.

I chose the latter.

“Yes, are YOU alright?” the passenger asked. The driver was still unable to pull herself together.

“I am, thank you. It doesn’t look horrible. Let’s just exchange insurance information and take some pictures,” I said. “And don’t worry, there’s no need for me to call the police on you and make this a bigger deal.”

As I started to walk away I decided to turn back around and say something to the driver, who wasn’t more than 17 years old: “This is your first accident, isn’t it?”

“Don’t worry. We’ve all been there. I’ve been exactly where you are today. We’ll get it figured out.”

We exchanged information and I went on my way. Sure, there was some damage to my truck’s front end, but nothing that can’t be replaced. What I was more concerned with was the effect that I could have on the two teens. I have a daughter, and I know that the chances she will rear-end, back into, or side-swipe another driver someday are very high. How would I want the person she hits to react?

Yeah, I could have told her off and tried to “teach her a lesson.” But in that moment I felt the call to show grace. I’m not sure of her spiritual state, but maybe one day she will hear about the grace of God and what I did will be a tangible example that will help her understand that grace.

Her dad called me later in the afternoon to ask me how I was doing. I told him I was fine, and repeated that we were all teenagers once and needed a little mercy. He was genuinely shocked.

“Wow, you don’t hear that much these days,” he told me.

And he’s right. We don’t hear of grace much. And that’s because we are not born with grace, love, and mercy being our automatic reaction. We need a savior to teach us that.

I don’t tell you all this to pat myself on the back, or show you how often I get it right. In fact, the whole reason this is worth sharing is because I DON’T get right a lot of the time. There are plenty of times in my marriage, in my parenting, or driving down the road that I don’t show grace. It’s only because of the grace that was shown to me by God that I can ever “get it right” once in a while.

Our faith is radical. Loving others when they don’t deserve it is radical. Showing grace when you have every “right” not to is radical.

So where, today, tomorrow, or this week can you display the radical grace of God, the love that saved you from having to react harshly in bad situations? The love that offers you another way.

Hint: It likely won’t be when you most expect it. In fact, it could even be in a gas station parking lot after a rained-out hunting trip.