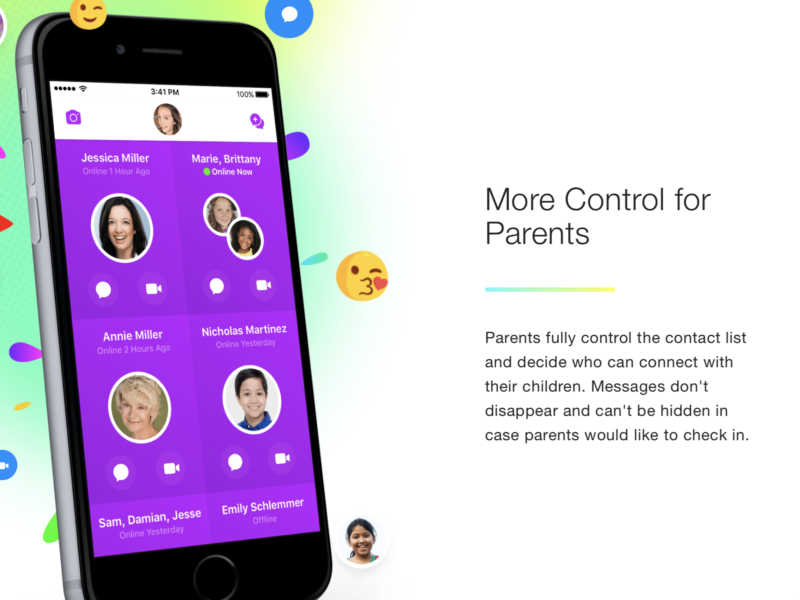 In an effort to both reach and protect children who use online messaging services, on Monday Facebook launched a new app specifically for kids to communicate with one another and their parents. The new service is called Messenger Kids, and it comes with some unique safety features meant to curb child predation.

While Facebook is technically not open to anyone under 13 years of age, the social network giant recognizes that rarely stops kids from setting up an account. With Messenger Kids, the company is working hard to give parents better tools to oversee social network usage for youngsters.

For example, should your child want to start messaging another person using the new app, it requires not only your approval, but the approval of the other child’s parent as well. TechCrunch explains how it works:

Once the parent has authenticated in with their own account, they set up a mini-profile with their kid’s name and photo. Then, using the Messenger Kids bookmark in the main Facebook app, parents can approve anyone who is friends with them as a contact for their kid, like aunts and uncles or godparents. Messenger Kids is interoperable with the main Messenger app, so adults don’t actually have to download the Kids app.

Kids still can’t be found through Facebook search to protect their privacy. So if a child wants to be able to chat with one of their classmates, their parent must first friend that kid’s parent, and then will see the option to approve that adult’s child as contact for their own kid.

Additionally, “Special proactive detection safety filters prevent children from sharing nudity, sexual content, or violence, while a dedicated support team will respond quickly to reported or flagged content,” TechCrunch adds. And the Giphy keyboard has even been scrubbed so that the material is kid-friendly.

As NBC puts it, “The service won’t let children add their own friends or delete messages — only parents can do that.”

Still, you should know that there are some limitations. For example, there isn’t any sort of look-in or spy-like capability, meaning a parent has to actually ask to see the child’s phone to view chats. That said, if a piece of objectionable content is reported, parents will receive an alert.

If you have data privacy concerns, the Washington Post explains how exactly all the information collected will be used:

Facebook said it will collect some data, including a child’s name, the content of their messages and data about how the app is being used — even if it is not as extensive as the information it asks from adults. No data from Messenger Kids will be fed to the main social network, nor will their information automatically port to other Facebook products when they turn 13, the company said. But, per the app’s privacy policy, Facebook reserves the right to share information with third parties, which must in turn prove to Facebook that they have strong privacy policies to protect children. Davis said that Facebook spoke with the Federal Trade Commission to ensure that the app is compliant with COPPA.

Facebook has set up a website for parents that has FAQs and explains the ins and outs of the service at messengerkids.com.

While it’s encouraging to see a major player like Facebook take steps to protect children, we can’t stress enough how important it is for parents to make their own informed decisions about social media and to be involved in their children’s lives. What may be right and OK for one family may not be wise for another. And it’s important to consider all the implications associated with your children becoming “plugged in” at an earlier and earlier age.

But in an age where online predators are becoming more savvy, families need all the tools they can get. Especially in light of the news of a Texas 13-year-old who ran away to Mexico with a man she met online.

Should you decided that Messenger Kids is appropriate for your family, share your experience with us.

Now read: Parents, you need to know what the ‘Blue Whale Challenge’ is right now