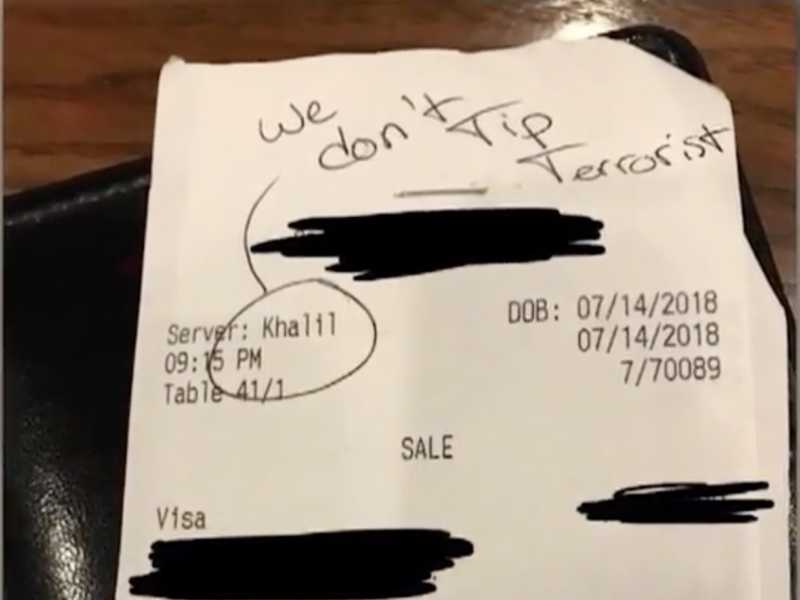 He said he wanted to remind people racism and hatred “still exist,” but now the truth is getting in the way of his message.

Khalil Cavil, a 20-year-old server at the Saltgrass Steak House in Odessa, Texas, garnered a lot of attention last week when he claimed he received a bigoted message — sans a tip — from a customer. Cavil, who speaks openly about his Christian faith, claimed the patron left a note on his check that read, “We don’t tip terrorist [sic].”

Cavil’s claim resulted in the customer being banned from returning to the restaurant, but now he’s admitting his story wasn’t true.

After the restaurant worker’s story spread everywhere from local news outlets to The Washington Post, Cavil said Monday he was the one who wrote the racist message on the dinner ticket.

In a Facebook post that has since been deleted, Cavil claimed that, in the aftermath of the fabricated incident, he was reminding himself that “Jesus died for these people, too.”

“I did write it,” the young server told the Odessa American during an interview, offering no reason for his actions. “I don’t have an explanation. I made a mistake. There is no excuse for what I did.”

The owner of the steak house originally stood by Cavil, issuing a statement of support. But the restaurant’s chief operating officer, Terry Turney, issued an updated comment after Cavil admitted his story was a hoax.

“After further investigation, we have learned that our employee fabricated the entire story,” Turney said. “[R]acism of any form is intolerable, and we will always act swiftly should it occur in any of our establishments. Falsely accusing someone of racism is equaling disturbing.”

Turney has also contacted the customer in question and invited him back for a free meal.

Before he fessed up, Cavil’s story was really picking up steam. Not only has it spurred a conversation about racism in America — his stated goal — but it also led many on social media to offer money to Cavil, who is working to save money so he can attend college in Dallas this fall.

The money he had received so far totaled around $1,000.

“All money is being processed and being return[ed],” he said. “Most all of it has been returned.”

Cavil, who is no longer employed at Saltgrass, said he told the restaurant’s management on Sunday that his accusation wasn’t true. He went on to explain he is “getting the help that I need.”