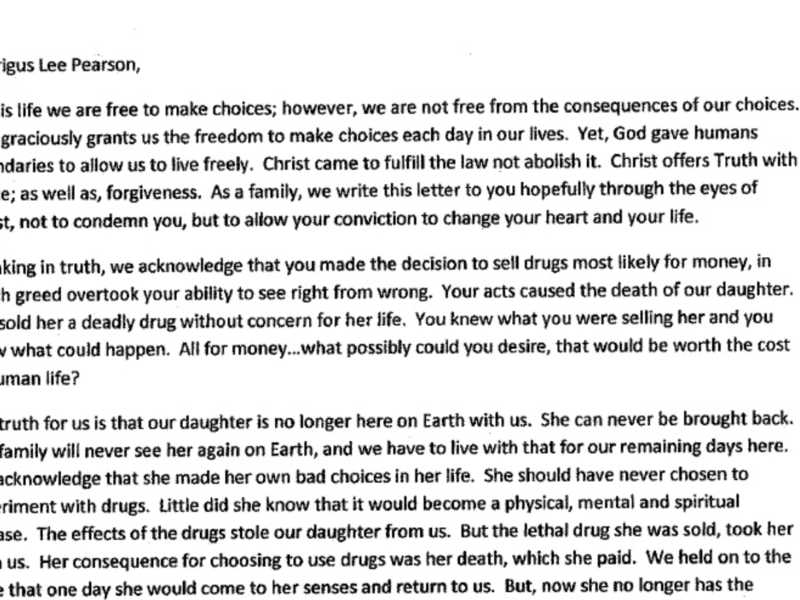 “We extend forgiveness to you for the wrongs against our family in the same way that Christ has forgiven our wrongs, even without asking for that forgiveness.”

Those are the powerful words Mike Bailey delivered to 20-year-old Rodrigus Lee Pearson in an Alabama courtroom last week. Pearson was being sentenced for selling Bailey’s daughter a lethal dose of the prescription drug fentanyl. Ashlynn Bailey died of an accidental overdose of the drug on January 30, 2016. Prosecutors traced the drugs back to Pearson, and he reached a plea deal that required a minimum 20-year sentence, which he got.

But despite the hurt, pain, and loss, the Baileys weren’t going to let anger and hate consume them.

“As a family, we write this letter to you hopefully through the eyes of Christ, not to condemn you, but to allow your conviction to change your heart and your life,” Bailey’s statement began. He continued, delivering a gospel message to Pearson and telling him that “we hope you will turn to God for the salvations of your sins.”

It didn’t end with words. After finishing his statement, Bailey did something incredible: He went up to the man responsible for the drugs in his daughter’s death, reached across the table, and extended a handshake.

You can read the full statement below:

Still, the family has been open about their daughter’s descent in to drugs. They’ve set up a foundation in her name to raise awareness and aren’t afraid to tell her story:

Through counseling sessions at the first rehab, we learned that Ashlynn had a terrible misfortune happen to her personally during high school and she just could never get over it.  She would use drugs to hide her pain and her self- hate.  She had used most every kind of drug, but the hook line and sinker was her drug of choice-HEROIN!  It is a very difficult drug to rehab from especially in a true addicts brain.  Looking back at Ashlynn’s life and her personality, we truly believe that she had addictive tendencies all along and it took one time of the right drug for her to be ever hooked on it and the constant craving of that first experience with heroin.  As we look back, we believe the devil used the drugs to devour Ashlynn because the devil knew she would be a great Christian warrior.  She was a threat to him and he went after her with a vengeance.

“She loved God and had a real anointing for leading others to Christ.  She felt that everyone needed to go to Heaven. She led several of her friends to Christ,” the website reads.

As for Mark Bailey, while it may have been hard to read the statement in court, in the end the decision to forgive was a no-brianer.

“A friend of mine asked how hard it was to forgive,” he said after the sentencing. “Then I remembered how much I’ve been forgiven (in life).”