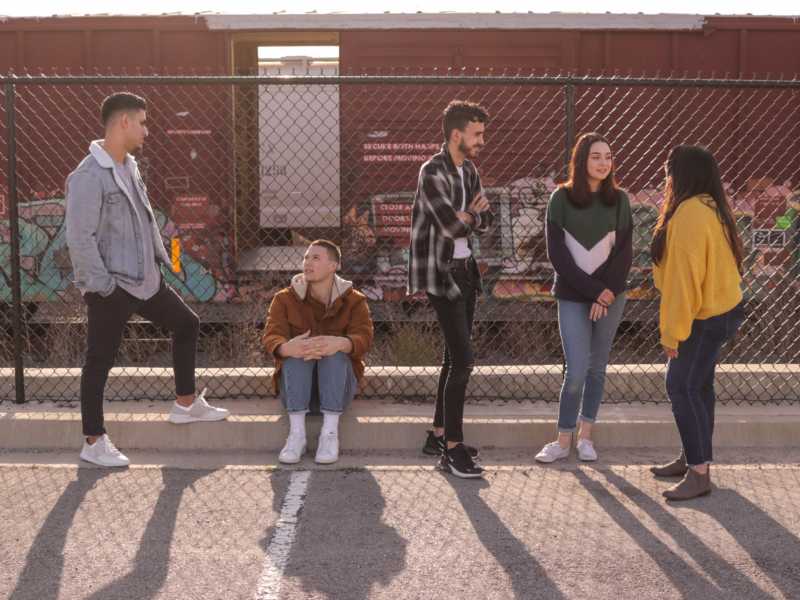 Manny came home one day from school and jumped into his routine of telling me all about his day, classes, and friends. I was beginning to notice a certain girls name being said a lot in his recap over the course of a few weeks.

So, like any nosey mother, I asked him about her.

He went on to describe how they met in class, started talking, and have since formed a friendship. Manny eventually disclosed that he had a tiny crush on her but knew he wasn’t allowed to date (because he’s too young based on the standards James and I have set) and reassured me they were just friends.

The very first question I asked him was, “Does she love Jesus?” He gave me a weird look and said, “I don’t know” while shrugging his shoulders. I suggested he should ask her and we then continued on in the conversation talking about the rest of his day.

The next day when Manny came running off the bus he immediately jumped into telling me about his day and started with how he asked his new friend if she goes to church. He thought that was the “cooler” way of asking if she loves Jesus.

He told me that she said no, but sometimes she goes around the holidays. Manny shared how he asked her if she had a relationship with Jesus and she said no.

After listening to him retell his conversation I asked if it bothers him that she doesn’t have a relationship with Christ and he looked at me and said, “I dunno, should it?”

I responded by asking him a question back, “Well it depends, how important is Jesus to you?”

He thought on the question for a second and responded by saying Jesus is important to him but asked if it even matters if the girl he likes does too.

I want to share with you what my response was in hopes that it will encourage you in your conversations with your teenager. I’m no means a perfect mother and just like many moms, I figure it out as I go. But, this topic is a common conversation many Christian mothers have with each other and a conversation we shouldn’t shy away from having with our children.

Why Christian Parents Should Care If Their Child Dates An Unbeliever

1. Foundation:  When Jesus is the foundation of our children’s lives, every decision they make and viewpoint they form will be based on that foundation.

In the same way, if Christ isn’t the foundation of their life their choices and viewpoints will come from whatever they make their foundation from.

When two people commit to a dating relationship with one another they slowly start to build that foundation together. We should ask our children what they’re going to allow in their foundation, who are they going to allow to shape it? How can they build a foundation that will not crack or break if it’s made out of different materials?

Christ calls us to deny ourselves, take up our cross, and follow Him (Mark 8:34). I asked my son, “How can you expect to follow a Master who requires absolute allegiance if you choose to become “one flesh” (Genesis 2:24) with a person who disregards His claims?”

I showed Manny the scripture in Luke where Jesus talks about what it’s like to have Christ as your foundation in life to build upon and if he marries a woman whose foundation is not Christ and they build a faulty foundation together- it will crumble.

Luke 6:46-49 says, “But why do you call Me “Lord, Lord,” and not do the things which I say? Whoever comes to Me, and hears My sayings and does them, I will show you whom he is like: He is like a man building a house, who dug deep and laid the foundation on the rock. And when the flood arose, the stream beat vehemently against that house, and could not shake it, for it was founded on the rock. But he who heard and did nothing is like a man who built a house on the earth without a foundation, against which the stream beat vehemently; and immediately it fell. And the ruin of that house was great.”

2. Sharing The Load: Christians are often told to not be unequally yoked with another unbeliever especially when it comes to the context of dating. That scripture in Corinthians isn’t referring to dating or marriage but it’s not a stretch to apply the concept to that area of our life or our children’s.

Manny didn’t know what being “unequally yoked” even meant, so I explained how a yoke is a bar or frame that is attached to the head/neck of two work animals, like an oxen. This bar is placed on both animals so they can plow and pull a heavy load.

The yoke keeps them in one accord, they no longer walk individually, and they walk as one. The purpose of the yoke is to make the burden of the load lighter. Furthermore, the same two animals were always used when joined together.

Do you want to join Kirk Cameron’s online faith-based community? Sign up for a free month here.

The farmer wouldn’t use two different kinds of animals because if the animals are built differently, one would carry more of the burden causing the other to weaken or give up.

Within the context of general relationships between a believer and an unbeliever, one may end up weakened or moving away from their faith due to the differences in their focus and direction.

When our children become adults there will be all kinds of events and seasons in life they will face. If Paul in Corinthians is warning us to not worship or partner in business with an unbeliever because of the unequal state of the heart how could we assume it’s OK to become one flesh with an unbeliever in marriage and not experience the same issues?

II Corinthians 6:14 says, “Do not be unequally yoked with unbelievers. For what partnership can righteousness have with wickedness? Or what fellowship does light have with darkness?”

3. State Of The Heart: I told Manny that I’d care more about his desire to be with an unbeliever then I would the actual decision because his desire to start building a foundation with someone of different beliefs would show me where his heart is at with Christ. And that is of utmost importance to this momma’s heart.

I want my son to passionately love Christ and serve Him all the days of his life. I’m spending these years raising him in The Word and teaching him about Jesus so when he becomes an adult he will not depart from those teachings (Proverbs 22:6). I shared with Manny that I want the desires of his heart to reflect the same desires of the One who created it.

We can encourage our children to use this as a tool to self-reflect. To ask themselves why they would or wouldn’t consider dating someone with a different foundation. To see where their heart is with Christ and to pray and seek guidance.

While ending the conversation  I told Manny to spend time being friends with this girl. Ask her purposeful questions to get to know her and her viewpoints. To pay attention to the things she says while they hang out as they will reflect her heart.

After a few weeks, Manny came home and shared with me some things this girl had said in response to his questions and the conversations with his friends. He shared why he didn’t like some of her answers and how he saw that if they were old enough to date that it wouldn’t work out in the end unless he was willing to change and that’s something he’s not willing to do.

As parents, you and I should care who our children choose to date. I’m not saying this from a place of judgment but from a heart of encouragement. Often, parents find it hard to hear this message especially when their child is currently choosing to date someone who’s not in a relationship with Christ. But, please hear my heart on this.

I want your child, just like mine, to passionately love and serve Jesus all the days of their life and I want them to be with someone who is doing the same. I want them to take life on with a partner who can share the load and walk together with your child toward Christ. And according to The Word, Jesus wants the same.

This post originally on HeatherMargiotta.com and was republished with permission.

Do you want to join Kirk Cameron’s online faith-based community? Sign up for a free month here.