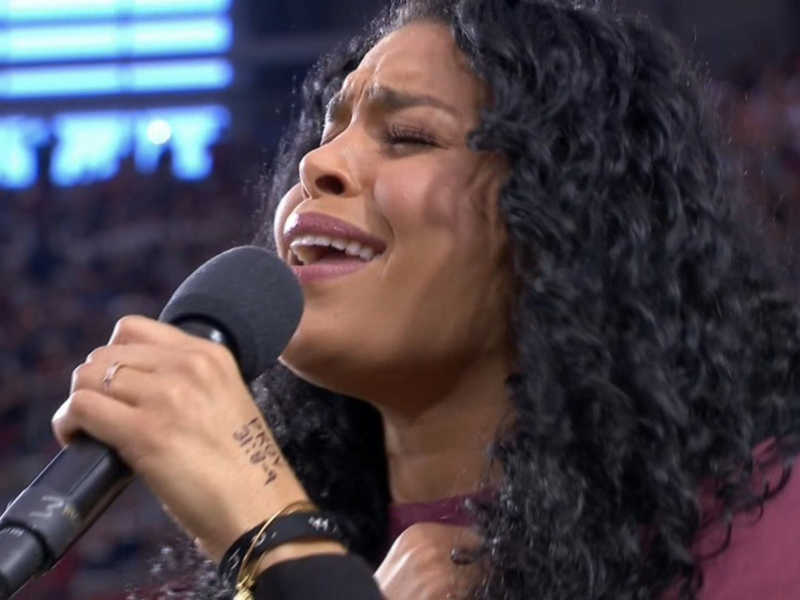 The National Anthem and the various stances NFL players have taken during it this weekend, as well as President Trump’s words, have dominated headlines over the last several days. On Monday, during the final game of the NFL’s week 3, the Dallas Cowboys and Arizona Cardinals both locked arms before the Star Spangled Banner, with the Cowboys and even their owner, Jerry Jones, taking a knee before (not during) the song.

And while many will be talking about that this week, what may have gone unnoticed is the small, hidden message written on the hand of the night’s National Anthem singer, Jordin Sparks.

Can you see it?

Proverbs 31:8
Speak up for those who cannot speak for themselves, for the rights of all who are destitute. #12Sports pic.twitter.com/Gs1xauFIOj

Sparks, a former American Idol winner, Arizona native, and child of a former NFL player, wrote a Bible verse on her hand — the same hand she used to hold her mic — and it was written specifically so viewers could read it.

So far, Sparks hasn’t said exactly why she wrote it or expanded on the verse.

No matter where you stand on the Anthem protests, one thing is clear: The country needs unification. It’s why October 24 can’t come soon enough. That’s when Kirk Cameron will be talking LIVE about where our country goes from here with people like Ben Carson and Ravi Zacharias during Revive Us 2, in theaters nationwide.

“Today, we’re divided over race, politics, religion, over gender, over choice — it seems worse than before the election. How in the world are we going to move forward in a healthy way? It’s time for another meeting,” Cameron said recently.

“I’m seeing people of integrity, people of faith, people who want to change the world and make a positive difference and bridge all of these divides and really let their light shine in practical ways,” he added.

It could not come at a more perfect time.

(To join Kirk for a night of hope, courage, and unity, click here)