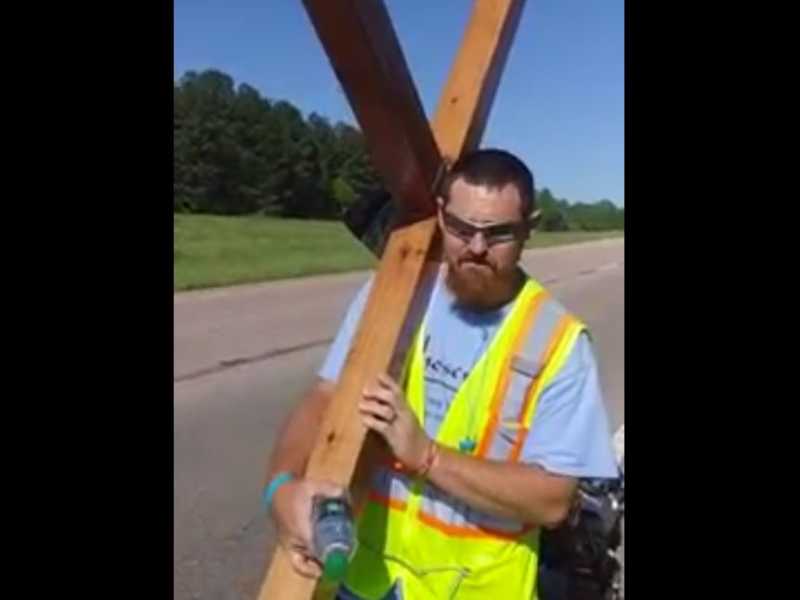 In Matthew 16, Jesus Christ issued one of the most well-known challenges ever uttered: “If anyone would come after me, let him deny himself and take up his cross and follow me.”

One South Carolina man has decided to do just that, by carrying a large wooden cross all the way to the Grand Canyon. Acie Burleson, 34, built the replica cross himself before embarking on the pilgrimage as a demonstration of his devotion to the Lord.

“The moment that I gave my life to God, my life was radically changed, and that’s what makes this walk kind of easy — is Jesus,” Burleson explained in his most recent video on Facebook. “Jesus is amazing.”

Incredibly, despite embarking on his journey armed with a one-man tent, Acie has not once been forced use it!

Do you want to strengthen your marriage? Sign up today for Kirk Cameron’s online course!

“I prepared myself to spend nights outside, by carrying a one-man tent on the back of my cross, but since the day I left, I’ve not had to use it!” he told Faithwire. “God has provided everything!”

Watch this video taken Friday afternoon of a man pulling a cross through Alcorn County on U.S. Highway 72 West in the Theo area.

As you can imagine, spending that much time on a public road affords Burleson many opportunities to share the Gospel with others. Almost two months into his journey, the dedicated follower of Jesus has seen some staggering things take place.

“There was a woman driving and she was just looking at me, so I waved like ‘Hello’ and kept walking. She then cut me off and is just falling out of her window weeping and crying,” Burleson told the Carolina News and Reporter.

“Just like that, crying, and I was like, ‘Oh my gosh what’s wrong? What happened? Are you alright?’ and she said, ‘I was one block away from killing myself and you stopped me,’” he recalled.

During the course of his trip, Burleson noted that many have stopped to offer him a word of encouragement, to give him a ride and even to lay hands on him in prayer.

Sharing the gospel with the cops

“Just yesterday, I was crossing the only walking bridge in Memphis TN to west Memphis AR. While going across the bridge, I was telling people to ‘pray and be ready for the coming of Christ’” Burleson told Faithwire.

But as Acie neared the other side, he realized that the gate was locked shut. So, he ventured back across and entered a local church to see if they could help him out.

Then, out of nowhere, the police showed up — apparently, someone had called them in thinking that Burleson was causing an issue on the bridge. “Four cars… they said someone was on the bridge causing a problem,” he explained.

After asking him what he was doing walking through town with a massive cross strapped to his back, Burleson decided to share the gospel with the inquisitive officers. “I told them my story and instead of charging me, they helped me get across the bridge!” he told Faithwire. “See, what the devil meant for bad, God used for good! I love Jesus!”

Others, unfortunately, have been less inclined to engage in morale-boosting.

“I have gotten every look you can from people,” Burleson noted to the Reporter, “but who cares, I am loved by Jesus!”

Burelson, who is aiming to reach the Grand Canyon by the end of May, hopes that his dedication and commitment will inspire others to take a risk and step out for Christ.

“I encourage anyone who is being called by God, not to be afraid to step out of the boat! It’s time for the laborers to start working!” he implored. “God WILL provide! I’m living proof. People need Jesus now more than ever!”

You can keep up to date with Burleson’s progress on his Facebook page here.

Do you want to strengthen your marriage? Sign up today for Kirk Cameron’s online course!