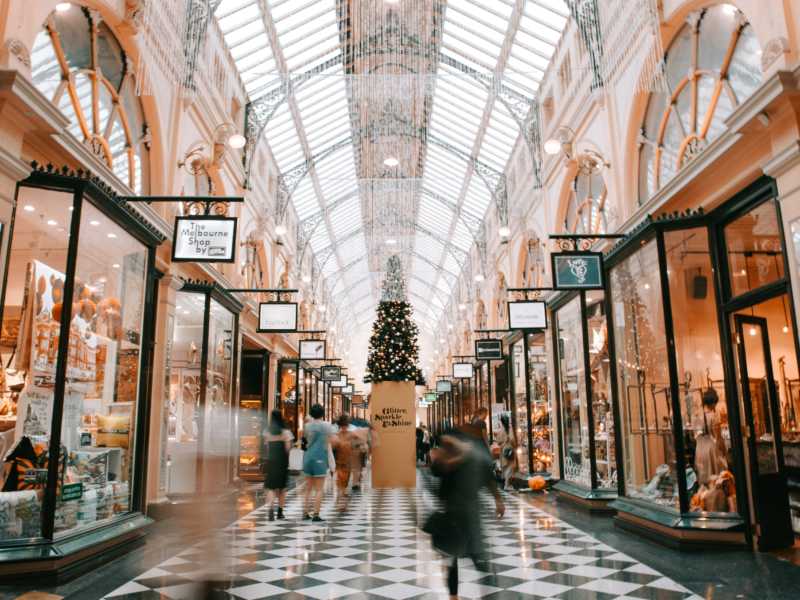 On November 28, 2005, the Motorola RAZR V3 flip-phone was making shopping lists, as was the Xbox 360. A device that allowed iPods to play through a cassette deck was popular.

And Cyber Monday was born.

The idea of focusing on online sales the Monday after Thanksgiving has been a boon. Last year, Cyber Monday online sales grew to a record $3.45 billion. I did an online search for “Cyber Monday” this morning: 239,000,000 results came up in .53 seconds.

With Black Friday and Cyber Monday, the Christmas season in America has officially started. Shoppers are expected to spend an average of $967 each, up 3 percent from last year. But while the economy is strong and consumers are optimistic, this morning’s headlines remind us that the things that matter most are not things.

Shoppers were evacuated from a mall in New York yesterday after reports of a shooting. A man entered a Costco in Kansas waving a weapon Sunday morning; an off-duty police officer shot and killed him.

This after more than three hundred worshipers died when their Egyptian mosque was attacked by terrorists last Friday. Searchers are still looking for an Argentine submarine that went missing eleven days ago; it had only a seven-day supply of oxygen when it reported its last position. And a man who survived the shooting in Las Vegas was killed in a hit-and-run, according to his wife.

Each story reminds us that life is as fragile as it is precious.

I’m especially thinking about that fact today after spending the Thanksgiving weekend with our sons, their wives, and our three grandchildren. Watching our children play with their children filled my heart with great joy.

Do you want to build a stronger relationship with your family? Check out our online video course taught by Kirk and Chelsea Cameron.

That’s how our Father feels about every one of his children.

As we enter the Christmas season, our Lord wants us to value people more than possessions and Jesus most of all. To make that point, I’d like to focus today on an insight from C. S. Lewis that has been on my mind recently.

In The Weight of Glory, Lewis notes that the most beautiful possessions and places in life point beyond themselves to a Reality that our souls long to embrace. They are therefore insufficient as ends in themselves: “They are not the thing itself; they are only the scent of a flower we have not found, the echo of a tune we have not heard, news from a country we have never yet visited.”

I found his insight to be true even during my recent visit to the Holy Land. Looking out over the Old City of Jerusalem as the sun set over glimmering limestone buildings, sitting in the olive-treed Garden of Gethsemane, standing before the ancient Western Wall, traveling on a ship across the sapphire-blue Sea of Galilee—how could I be in more holy places?

Surely if any places on earth could fill my soul, these would.

And yet there was something left out, something more. Something to which they could only point but never become. The city of Jerusalem was just a city. The Garden of Gethsemane was just an olive grove. The Western Wall was just a wall. The Sea of Galilee was just a body of water.

I have experienced the same longing amid the breathtaking grandeur of Alaska, the fiery beauty of a sunset on the Northern California coast, and the tranquil serenity of a Hawaiian beach. And I have discovered that it is the same with possessions as with places—they promise my soul more than they can deliver.

Do you own anything that satisfies the deep hunger in your heart for transcendent joy? Neither do I.

This Christmas season, let’s “continually offer up a sacrifice of praise to God, that is, the fruit of lips that acknowledge his name” (Hebrews 13:15). Let’s resist the secularity of the season by making a Bethlehem in our hearts where we worship the Christ of Christmas every day.

And let’s find a way to love someone God loves, every day. From frenzied shoppers to harried store clerks to friends and family who don’t know the reason for the season, Christmas in America offers no lack of people who need what we have.

Long after this season is gone, what you do to serve them will live in your soul and will honor your Savior.

In her daily devotional for November 26, Anne Graham Lotz made an observation I’d never thought about before. Anne focused on the fact that God “formed the man of dust from the ground and breathed into his nostrils the breath of life” (Genesis 2:7). She noted that “formed” translates the Hebrew yatsar, which means “to mold.” It is the word used to describe a potter molding and shaping clay.

And so, while God spoke everything in the universe into being, he “personally shaped the physical characteristics of man with His own hands and breathed into man His own life!” The only part of God’s creation that God touched personally was you. And every person you meet today.

Now we are the body of Christ (1 Corinthians 12:27), continuing his earthly ministry in a culture that celebrates Christmas but overlooks Christ. Will you be the hands of Jesus today?

Now read this: One question that will simplify your busy holiday season