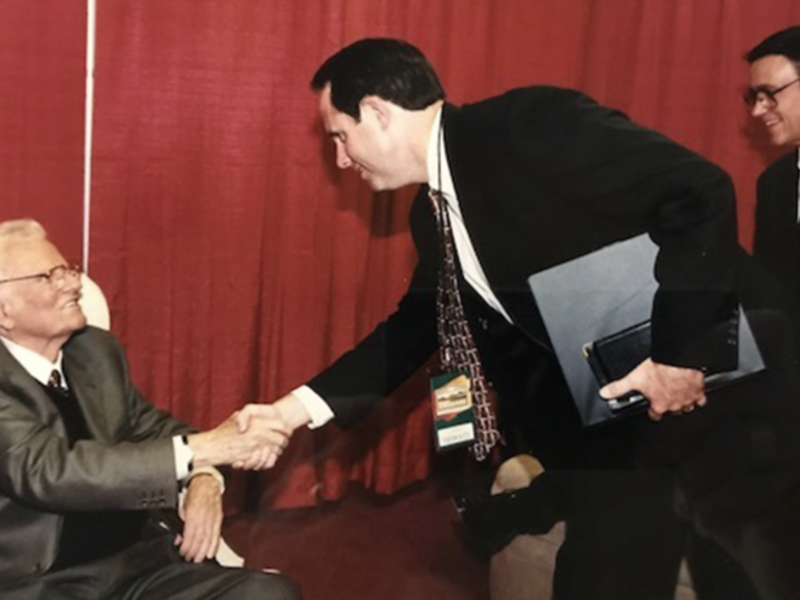 When I heard the news this morning that Dr. Billy Graham had died, my thoughts turned immediately to October 12, 2001. Dr. Graham was conducting an outreach event at Bulldog Stadium in Fresno, California. Terrorists had attacked America just a month earlier.

I was part of a delegation from the Dallas-Ft. Worth area sent to invite him to preach in our area. Our group was ushered into the stadium’s locker room where Dr. Graham was resting. His broken foot was in a walking cast and propped on the coffee table before him. He was sipping a glass of water and looking over his sermon notes.

Each of us took turns shaking his hand. When my turn came, he looked deeply into my eyes and, I felt, into my soul. I have never seen such purity in a person before. A sense of holiness settled over me as we spoke. I truly felt myself to be closer to God as I sat with him.

It was my responsibility to explain to him the reason for our visit and present a book containing more than seven hundred letters of invitation. After I made our request, he asked me why I felt we needed him to come. I understood his question to be related to the spiritual needs of our area, so I spent a few minutes describing the lostness of our cities and our great need for spiritual awakening.

Dr. Graham listened politely. Then he explained his question: He understood why we would need a spiritual revival, but why did I feel he was the person to help? At his advanced age, with his infirmities, how could he be of help to us?

Here was a man who had preached in person to more than eighty million people and led more than three million to Christ through his sermons and public invitations. He was commonly considered the greatest evangelist after the apostle Paul. And yet he was genuinely uncertain he had the capacities to do what we were asking him to do.

Dr. Graham took several weeks to pray and reflect before accepting our invitation. The Metroplex Mission with Billy Graham in October 2002 was one of the largest and most effective events in the history of the Billy Graham Evangelistic Association.

What explains the astounding success of Billy Graham?

His story might make more sense if he had been the son of a gifted pastor or senator, or if he had grown up in a culture-changing environment like New York City or Los Angeles. But he was born in a frame house outside of Charlotte, North Carolina, to hardworking farmers.

His elementary school teacher thought he had a gift for communication. However, he recalled giving his first speech as a class assignment: “My knees shook, my hands perspired, and I vowed to myself that I would never be a public speaker!”

“Two young high school boys attended our meeting. They thought that everything I said was directed their way; so they decided to take seats in the choir, where I couldn’t point my finger at them. They didn’t pretend to be singers, but they wanted to be behind me. . . . One night a man spoke to them during the invitation and said, ‘Come on, let’s go up front.’ Billy and Grady both went to the altar. Billy was saved, and Grady dedicated his life to Christian service.” Grady Wilson became one of Billy Graham’s most trusted ministry partners.

Three years later, Graham enrolled in Florida Bible Institute. He would canoe across the Hillsborough River to a little island where he practiced preaching four borrowed sermons to the birds, alligators, and tree stumps. Dean John Minder then gave him the chance to preach to some real people. Terrified, Graham replied, “You don’t understand, I’ve never really preached in my life.”

Dean Minder persisted, and Graham preached the next Sunday. He flew through all four of his sermons in ten minutes. But when he asked if anyone wanted to receive Christ, several raised their hands. Not long after, he got on his knees and accepted God’s call to preach the gospel.

Read this: Find out if you’re a builder or a breaker

Included in America’s “Most Admired” 61 times

From Florida, Graham moved to Chicago to enroll at Wheaton College, where he received his degree and met Ruth Bell. They were married two months after graduation. In the coming years, he pastored a church in Illinois, started a radio program, led thousands to Christ at Youth for Christ events, and, at age twenty-nine, became the youngest college president in the country at Northwestern College in St. Paul, Minnesota.

He and his evangelistic team-Cliff Barrows, Bev Shea, and Grady Wilson-began conducting crusades. In Modesto, California, they committed to rely on local funds rather than emphasizing money, to refuse to be alone with a woman who was not their wife, to support local churches, and not to emphasize numbers or publicity. This so-called “Modesto Manifesto” would undergird all the Billy Graham Evangelistic Association has done over the decades since.

The Los Angeles Crusade of 1949 marked a turning point. The meetings were scheduled for three weeks but grew to eight. Approximately 350,000 people attended the meetings. In the following years, Graham held crusades in over six hundred cities and 185 different countries. He was the first Christian to preach behind the Iron Curtain after World War II and became a friend to every US president from Dwight Eisenhower to Barack Obama.

Last year, Dr. Graham was included on America’s “Most Admired” list for a record sixty-first time. (Queen Elizabeth is second with forty-nine appearances.) He has received twenty honorary doctorates, the Congressional Gold Medal (Congress’s highest award), and the Presidential Medal of Freedom (the highest civil award America can bestow).

He wrote thirty-three books; the film studio he helped create has produced more than two million decisions for Christ. He was instrumental in founding Christianity Today, the leading evangelical magazine in America.

His son, Franklin, continues to conduct evangelistic events across the country. His daughter, Anne Graham Lotz, is a truly anointed preacher and teacher as well. My wife and I have been honored to be Anne’s friend for many years and to support her ministry with gratitude. (Dr. Graham often called her “the best preacher in our family.”)

What explains Billy Graham’s life and legacy? I am convinced that the secret to his success is the fact that he has never focused on success. His genuine humility and complete dependence on God have enabled the Holy Spirit to use him in truly historic ways.

Jesus noted, “Everyone who exalts himself will be humbled, and he who humbles himself will be exalted” (Luke 14:11). Dr. Graham is right: “Our job in life is not to be successful, but to be faithful.”

In his autobiography, Just As I Am, he wrote, “If anything has been accomplished through my life, it has been solely God’s doing, not mine, and He-not I-must get the credit.”

Dr. Graham often said that the first thing he would do when he got to heaven was to ask, “Why me, Lord? Why did You choose a farm boy from North Carolina to preach to so many people, to have such a wonderful team of associates, and to have a part in what You were doing in the latter half of the twentieth century?” He admits that “only God knows the answer.”

Now he knows the answer as well.

Without a doubt, he has now heard Jesus say, “Well done, good and faithful servant” (Matthew 25:23). Thank you, Lord, for Billy Graham.

Now read this: What does it mean to walk with God?