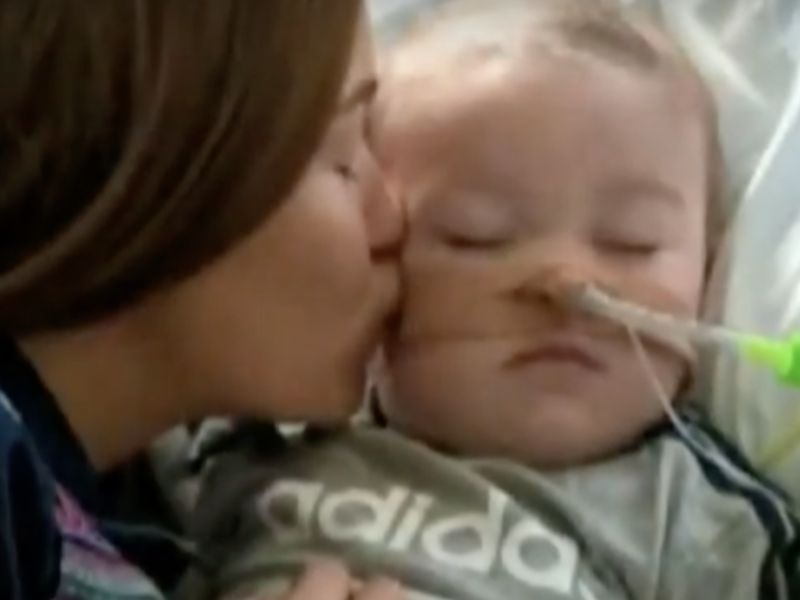 “My gladiator laid down his shield and gained his wings at 2:30.” This is how Alfie Evans’s father described the death of his twenty-three-month-old son early Saturday morning.

Alfie suffered from a degenerative neurological condition. His doctors in Great Britain said he was in a “semi-vegetative state” with almost no brain function.

His parents, Tom and Kate, wanted to provide further care in line with their Catholic faith. Pope Francis and Italian authorities supported their desire to have their son treated in Italy, where their wishes would have been honored.

Italy had a military plane on standby to take Alfie to Rome. He had also been granted Italian citizenship to facilitate his transport and arrival.

However, his British doctors believed that further treatment was futile and petitioned the courts to end his medical care. Under British law, it is common for courts to intervene when doctors and parents disagree on the treatment of a child. In such cases, the rights of the child (as determined by the court) are given primacy over the parents’ right to decide what’s best for their children.

Alfie’s life support was withdrawn last week after the courts sided with the doctors.

Conversely, Kate Middleton made global headlines Friday morning with the announcement that she and Prince William had decided on a name for their newborn son. Prince Louis has received the best of medical care, of course, and will live in the spotlight of fame accorded the British royal family.

In God’s eyes, which baby is more sacred?

Valuing life by its utility

One view decides the value of life by its utility. According to this approach, babies with Down syndrome will excessively burden their parents and are unable to contribute fully to society. Aborting them is therefore considered the practical thing to do.

This mindset is applied to impaired babies like Alfie Evans and Charlie Gard, another British baby who died after the courts prevented his parents from pursuing alternative treatments.

Many also believe that adults who are diminished or feel their lives are no longer meaningful should be supported if they choose to end their lives.

Consider the Brickendens, an elderly couple who recently chose to end their lives together. Two nights before their death, they went out for one last date at their favorite restaurant. The next night, they bid farewell to more than twenty family members at a “bon voyage dinner” hosted by their daughter.

The evening of their deaths, they were surrounded by family, two doctors, and the dean of Toronto’s St. James Cathedral.

Valuing life as God does

The other view claims that every human life is intrinsically sacred from conception to natural death, regardless of the individual’s utilitarian value. This position is rooted in two biblical convictions.

Read this: How to keep your faith strong no matter what happens in your life

But what about the Fall? It is a fact that every human inherits original sin, as David admitted: “I was brought forth in iniquity, and in sin did my mother conceive me” (Psalm 51:5). None of us reflects fully the divine image in which we are created: “All have sinned and fall short of the glory of God” (Romans 3:23).

But here’s a second biblical fact: each of us is sacred because God’s holy Son died for us. Jesus did so “while we were still sinners” (Romans 5:8).

An item is worth what someone will pay for it. In our case, the God of the universe considers us worth the death of his Son. Could we be valued more highly?

An obstacle is an opportunity

Unless our society experiences a spiritual awakening that transforms its worldview, we can expect the prevailing culture to continue valuing life by its utility.

As medical science enables pregnant women to identify more diseases and impairments in their unborn children, we can expect abortion rates to escalate. As euthanasia becomes more available and easier to administer, we can expect suicide rates to increase.

But every cultural obstacle is a spiritual opportunity.

God calls his people to value every life as he does: “Be kind to one another, tenderhearted, forgiving one another, as God in Christ forgave you” (Ephesians 4:32). He is therefore calling us to care for those society abandons: “Religion that is pure and undefiled before God, the Father, is this: to visit orphans and widows in their affliction” (James 1:27).

When we love every person as God loves us, our witness is powerful and persuasive “in the midst of a crooked and twisted generation, among whom you shine as lights in the world” (Philippians 2:15). And when we comprehend how much our Father loves us, we are “filled with all the fullness of God” (Ephesians 3:19).

Remember: You are worth what Jesus paid for you.

Now read this: The night I met Billy Graham and what it taught me