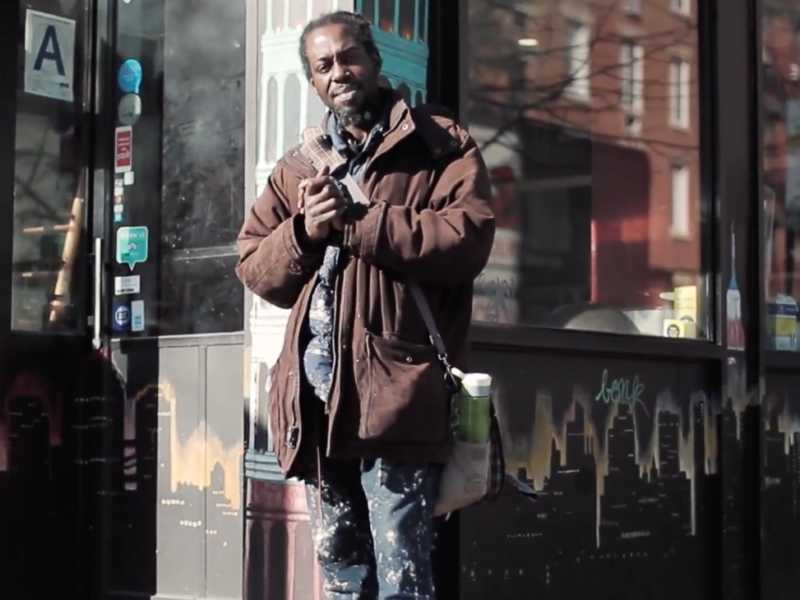 I absolutely love a good testimony. While it’s wonderful to hear from anyone sharing what God is doing in their life, James Cunningham’s story is particularly powerful.

James recently shared his gripping testimony via C3 Church in Brooklyn, NY and it stopped me dead in my tracks. His story shows the saving grace of Christ and how He can lift us from the deepest depths, but it also shows how we should never, ever underestimate how a simple act of love and kindness can literally change someone’s life forever.

“Trying to get off the streets, it was like everything was going wrong in my life and I didn’t know what to do but I gave it to God. This is when they say you walk by faith, when you let go and let God.” James.This is a story of grace, of faith and of trust. Click to watch James’s story from this past Sunday and hear of his life being radically changed by Jesus. Share this story and bring hope and faith to the people in your world. We are believing for more stories of grace this Sunday at Easter, you’re invited. https://www.c3.nyc

Born in Memphis, Tennessee, James early life had many ups and downs. Enough downs to eventually land him at Rikers Island prison in New York.

“I didn’t know what my future held. I was desolate. I had been battling myself and God for a while,” James said as he described facing the uncertainty of his parole violation.

As for the battle between he and God, James foreshadowed the ending: “He won.”

That didn’t seem like the obvious ending at the time. James’ father had just passed away, near the 15 year anniversary of his mother’s death. He was spiraling out of control. All of the so-called ‘friends’ around him only seemed interested in keeping him drunk or high, which only furthered his despair.

Now homeless and “sleeping on the sidewalk on 4th street,” James was seemingly out of family, out of options, out of hope. On August 1st, told his friends he’d be lucky to survive through September. His ‘friends’ didn’t seem all that concerned.

“I made a promise that if God let me see September 1st, I’m done fighting,” he explained through tears. “Wow, what a month,” he said of that fateful August, where his life was literally on the line. It was a brutal month, filled with confusion and despair and sadness.

And then, just in time, God sent an angel.

“During that timeframe, I met a guy named Manny. Emanuel Hastings. I was panhandling, shaking a cup asking for change. This gentleman stopped and bought me a slice of pizza and had a conversation with me and treated me like a human being,” James says.

This is the part of the testimony that really gets me. Everyone needs a Manny in their life at one time or another. And everyone needs to be a Manny to someone else.

We’ll continue with the story in a moment – but I want to pause and focus on what Manny did because it’s critical. He didn’t just throw some quarters into a jingling cup so he could feel a little better about himself or avoid looking cheap – he actually took the time to talk to James.

Conversing with complete strangers is an art utterly lost today. And I’m the first to admit I’m guilty of being too busy, too irritated, and to my shame, even too judgmental sometimes to bother engaging the way Manny did. God bless him, and let his example challenge us to find a way to be that the next time we get the chance.

Just listen to how it changed James’ entire outlook on life.

“It was something I hadn’t felt in a while (feeling like a human being). There was a part of me that was starting to remember that I am a human and I deserve better,” James says.

He continued: “For some odd reason, I felt comfortable with him and I just opened up. I was trying to get a place to stay, I was homeless, I didn’t have a job, I didn’t have anything. This man knew me four days and he showed up at Tompkins Square Park with his laptop and ordered my birth certificate over the internet.

A beautiful, simple act of kindness that probably didn’t take Manny all that much time or effort, yet it quite literally changed a man’s life.

“The first seven days of meeting Manny it was like God put him in my life for a reason. During this time I got “A Purpose Driven Life” and I got a Bible and I started to use them,” an emotional James said.

For many years, James says, he was battling and fighting God. He was losing and losing badly. He didn’t know what to do. It was only when he embraced the cliché “let go and let God” that things started changing drastically.

James says that he now has a “spiritual team” that he can call 24/7 and they’ll be there to talk about anything. He calls his brothers and sisters in Christ closer to any people related to him by blood.

“The devil is a lie,” James says. “Everything that could go wrong went wrong with me. But God made a way. The tears you see are the tears of joy tears of happiness. Tears I never thought I’d shed.

“It just sealed the deal for me that the people in my life, God placed them there for a reason… to be able to lift Him up and Glorify Him. He’s using me as an instrument in every way, every step, every form, every minute of the day. I’m using the platform he’s given me and I’m pushing his word out there. GOD IS GOOD.”

God bless James for his faithfulness and his powerful testimony. God bless Manny for showing the love of Christ to a stranger in need. May we all be encouraged and inspired to desperately seek after God in all that we do, and to fearlessly lead others into the same redemption we’ve found in Christ.

Do you want to grow in community with other believers? Join Kirk Cameron’s online community today.