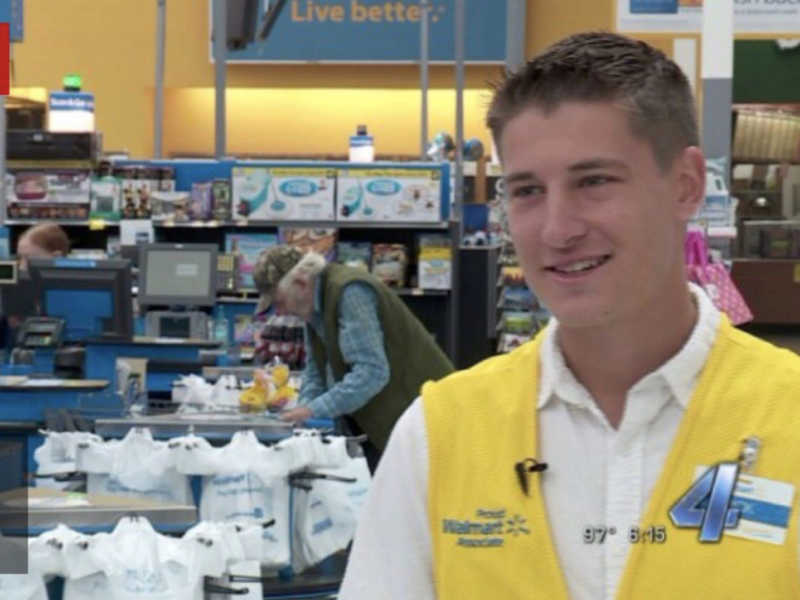 A 20-year-old Walmart employee is getting attention for all the right reasons this week after he listened to God in the checkout line and helped a struggling mother.

It all took place in Newcastle, Oklahoma, on a recent Friday night. A woman with three children approached the checkout lane manned by Nicholas Tate. She was flustered.

That’s when the woman explained that she was fostering the little baby. As a result, she had to use WIC, the government assistance food program, to pay for some of the items. However, she had never done it before, and just set it up that day.

“She apologized beforehand. She said ‘I have never used WIC before. I don’t know how it’s going to go,’” Tate said.

“She had a good amount of items and most of them went through, but she apparently didn’t have the right formula and it wouldn’t go through,” Tate told CBS.

However, because WIC only applies to certain items and brands, the woman’s baby formula was not going through. That’s when he started to feel a tug.

“I just felt like God was telling me just to pay for it,” he told KFOR. The line behind the mother was growing.

Very proud of one of our associates tonight for going above and beyond to help a customer. Store manager Barry…

“[There were] more customers, more grumbling and dirty looks as they moved to the other lane and I’m frustrated and trying not to cry,” the woman, who needs remain anonymous due to privacy concerns for the foster child, wrote in a Facebook post. “At this point, a lady we know came up and asked why I was causing so many problems. I told her I was just failing as a foster mom because I can’t figure out WIC and almost burst into tears right there.”

Tate called a manager over to see if they could get it to work. They couldn’t. That’s when Tate listened to still, small voice inside.

“I already had my card out at that point. I felt like God was telling me to pay for it,” Tate explained. “The second it didn’t work I swiped my card.”

In an instant Tate paid $60. The woman began bawling.

“I don’t remember everything he said to me after that but I do know he told me that I wasn’t failing and that what we were doing was an amazing thing,” she said on Facebook.

“You never know what God is going to do. Yeah, it might be hard. It might be scary. It might be a day’s wage. But, if God is calling you to do it, he’s going to have something major for you,” Tate told KFOR. ​