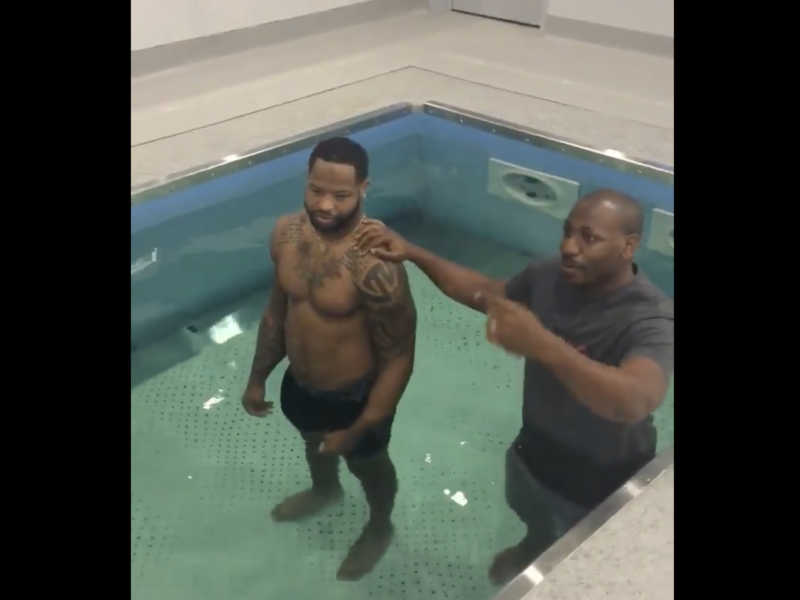 Anthony Hitchens is regarded as one of the better linebackers in the NFL. He plays for the Dallas Cowboys and is one of the team’s top tacklers. This week, however, he set football aside and focused on something more important, something eternal. Along with two other teammates, Hitchens got baptized at the team’s facilities, publicly declaring his faith in Jesus Christ.

“Baptism is an external expression of an internal reality,” team chaplain Jonathan Evans says while standing in a pool with Hitchens. “And now, after accepting Christ, he’s a new man. Going under the water means he’s died with Christ and coming back up means he’s resurrected to the newness of life. That’s what this symbolizes.”

Evans then asks Hitchens to affirm his decision, before telling him to “assume the position.” Hitchens’ teammates cheer wildly as he is dunked.

It was an honor to baptize 3 Dallas Cowboys who identify themselves as Christ followers first! #IdentityInChrist #CowboyNation

Got baptized this morning ??

Nothing I do is ever for me !!! Forever give and you will receive #GodSon

“It’s good it’s blowing up,” Frazier told NBC.  “It’s getting His name out to a lot more people who may not be believers.”

“I was always a believer, but this was the first time I really took God seriously,” he added. “I was really glad to see (my teammates) alongside me cheering us on when we were getting baptized. They cheer us on on the field, but this is a different part of life.”