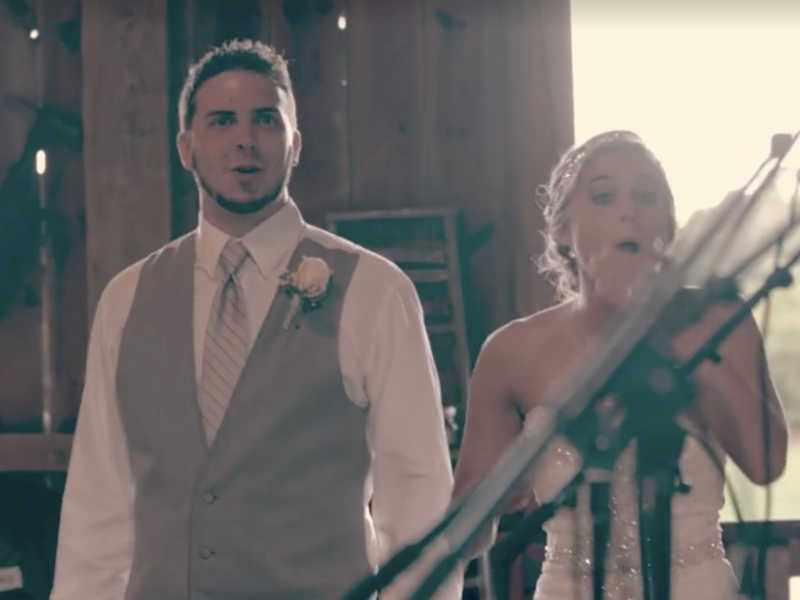 The group was in Wisconsin for one of the largest country music festivals in the world, Country USA. The wedding was taking place in Oshkosh, Wi, only an hour away. A friend of the bride and groom sent Rascal Flats an email explaining the couple’s story and how they had picked the group’s hit “God Blessed the Broken Road” as their wedding song. The stars aligned and the group decided to show up, much to the surprise of the couple and their guests.

Just check out the look on the bride and groom’s faces:

“It’s just a song that explains everything for us,” the groom, Brandon McInnis said.

“We’ve been through other relationships that weren’t the real deal, and then God really did bless the road for us,” the bride, Sarah McInnis, added.

Brandon said the couple did know there was going to be a surprise, but had no idea what it was going to be. And according to WTMJ-TV, only the bride’s sister knew and kept the secret for months. Even the wedding venue had no idea.

“When they started walking in we knew immediately who they were. I started bawling, he started crying,” Sara told WTMJ.

You can watch the video Rascal Flatts posted below, as well as a video of the full performance posted by the wedding venue:

Wedding crashing… Coming to a city near you! ? Sending a lifetime of love and happiness to Brandon and Sara. It was an honor to be part of your special day.

Look who stopped by at Sugar Island Barn and sang a song for the Bride and Groom! Rascal Flatts! THANKS GUYS THAT WAS AWESOME!