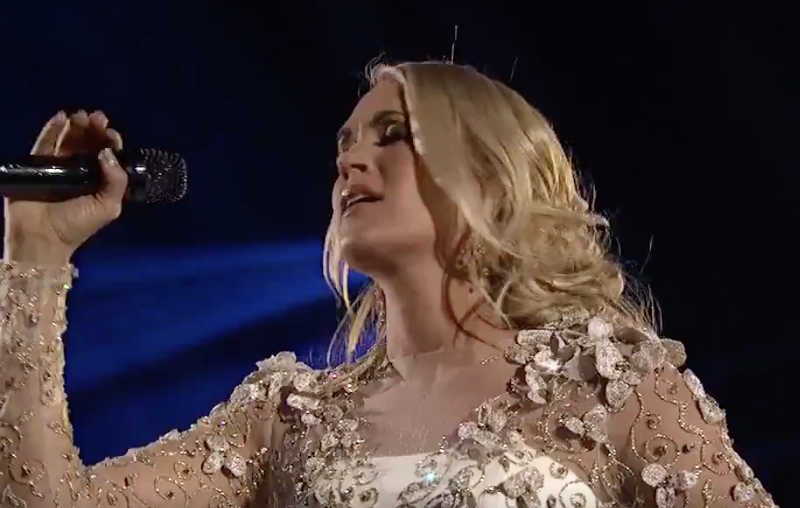 Country music’s biggest night took place Wednesday as the CMA awards were broadcast live on ABC. And a song about Jesus was easily the most moving moment of the big show.

Host Carrie Underwood, an unapologetic Christian, sang the classic hymn, “Softly and Tenderly Jesus Is Calling” in a tribute to the 58 lives lost at the country festival in Las Vegas on October 1. It was also seen as an ode to the lives lost amid the season’s hurricanes and the recent church shooting in Texas.

“This has been a year marked by tragedy… including so many in our country music family,” Underwood said during the program. “So tonight, we’re going to do what families do: come together, pray together, cry together, and sing together, too.”

And while Underwood absolutely nailed the song, it wasn’t easy. In fact, in a clip of the performance released by Good Morning America, you can hear Underwood overcome with emotion and breaking down.

Moving tribute from @carrieunderwood and @CountryMusic Association to those lost in Las Vegas on October 1st. Rest in peace…#CMAawards pic.twitter.com/FwhautLfVe

IJR has a longer clip:

Carrie Underwood nearly broke down in tears during such a powerful tribute.

As Faithwire noted, Underwood’s song wasn’t the only glimpse of faith during the awards. Early in the show, singer Eric Church  also sang Amazing Grace.