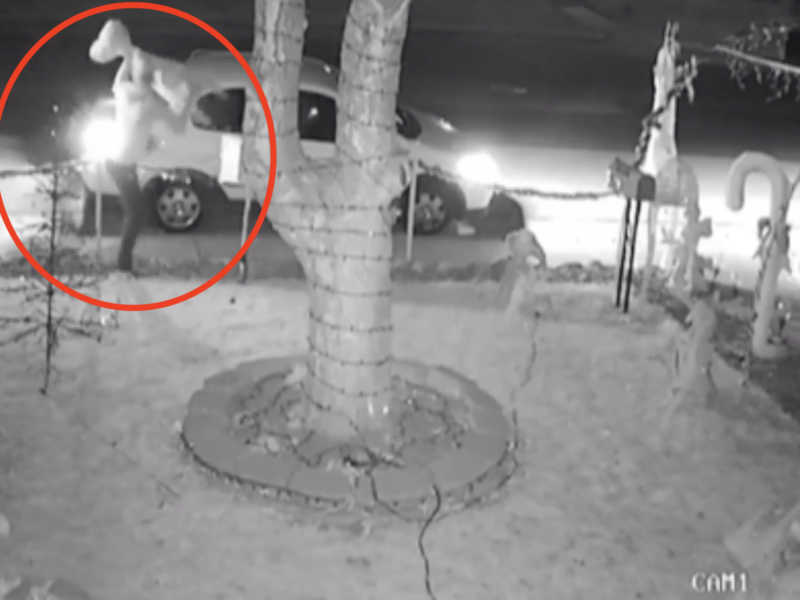 Every year in South Denver, Joe Stricker transforms his yard into something magical for Christmas. He calls it Stricker’s Winter Wonderland, and it’s a dreamy setup that includes tens of thousands of lights, takes 80 hours to setup, and is used as a fundraiser for his kid’s school. But over the weekend, it drew the wrong people: a group of vandals looking to play the role of the Grinch.

Early Saturday morning, Stricker’s security camera caught some people “Bah humbug-ing” his yard, ripping up some of his decorations, decapitating some of the plastic animals, and stealing one of them before making their getaway. Stricker, heartbroken and upset, shared the video with KUSA-TV in hopes of catching the thiefs. He never figured it would work as well as it did.

A family in Centennial needs your help! Surveillance video shows apparent thieves in their front yard, tearing up Christmas lights and stealing a three-foot dinosaur wearing a Santa hat before speeding off. Do you recognize them?

After the video was shared on the local news, one eagle-eyed individual recognized one of the vandals: It was his brother. He then called his out-of-state parents. When dad saw the video, he immediately took  action. He hopped on a plane to get his son, and within four hours he and a slew of other people, including other parents, were on Stricker’s doorstep apologizing.

Stricker was grateful, but also torn on what to do with the vandals, who weren’t teens. Instead, they were 27, 22, and 21.

“We thought about all the different options and we have two children of our own. It was hard, but these individuals were in their 20’s,” he told KUSA. “They had two days to come forward and they didn’t. It was absolutely tough for us to make that call. But, what example are we setting for our children?”

Instead of letting them off the hook, Stricker consulted with the parents and decided to have them cited, but requested they not be arrested. They now have to go to court and will have to pay fines.

“A very understandable and fair punishment agreed upon by both parties,” Stricker said.

What shouldn’t be overlooked is the actions of the father who wasn’t going to stand for his son’s actions. Not only did he hold him accountable, but he went through great lengths to do so by getting on a plane.

It makes me wonder: What lengths are we as parents willing to go to in order to make sure our children take responsibility for their actions? How can we love them and teach them valuable life lessons, even when it comes at a cost to us?

Let us know in the Facebook comments what you’ve had to do (or had done to you) in order to hold your children accountable.

Now read: After her son got suspended, mom comes up with brilliant consequence