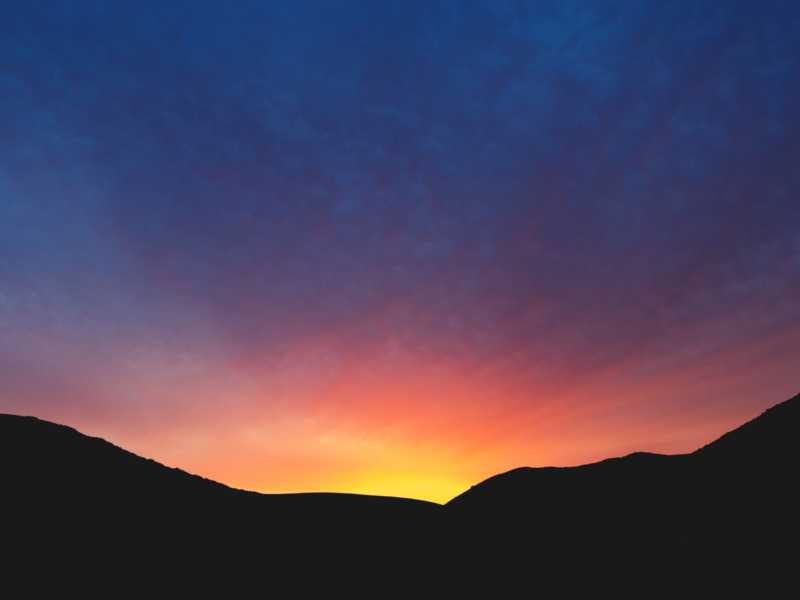 Did you know there are multiple definitions of dawn? Astronomical dawn appears to be the most common and is defined as 18 degrees below the horizon. At this point, the rays of light can’t be distinguished, but they are there, permeating the upper atmosphere.

So what we normally consider as still being night is actually not. Even before the sun rises above the horizon the darkness is fading, although it may not be perceptible to the human eye.

To an untrained observer, it might appear that the light is weak, unable to fully conquer the darkness at that moment. But in actuality, all the power of the light is in full measure; the timing simply hasn’t arrived for twilight to break.

So it must have been as Mary carried the Redeemer of all mankind in her womb. The dark and weary world thought it was still night. Little did they know it was only 18 degrees below the horizon. The SON might not have been distinguished, but the Kingdom of God was at hand.

Read this: The most important thing you will do this Christmas

The birth of Christ was the dawning of redemption.

And although that baby in the manger appeared helpless, that was an illusion. Already the darkness was weakening.

What the cradle started the Cross finished.

The dawning of redemption culminated in the Redeemer paying the price for redeeming mankind with His life. And what happened on that day when the sun was at its highest point in the sky? Darkness fell over the whole land for three hours. (Matt. 27:45-46)

It might have appeared the darkness had overcome the light. The one whose life was the Light of men cried out, “Into your hands, I commit my spirit.” When the darkness was finished, Jesus breathed his last. The author of life was placed in a tomb. But what looked like night was only an illusion. This was, after all, why the Son left the presence of the Father and the glory of heaven.

From the moment he took his first baby steps in Joseph’s carpentry shop, he was headed toward the nails of Calvary.

John chose not to mention Jesus’ birth, instead taking us straight into the reason for the Incarnation. The Word became flesh and dwelt among us, so that he could give His flesh to take away the sin of the world. He lived a perfect life and died a sinner’s death. And John emphasizes the ultimate outcome of that sacrifice:

“For from his fullness we have all received, grace upon grace.” (John 1:16)

The dawn of redeeming grace on Christmas night was from the beginning a preparation for the grace upon grace fulfilled on Good Friday.

The holiday song declares, “Don’t save it all for Christmas day… “ Today, the message to consider goes more like this, “Don’t wait until Easter to BEHOLD the cross.”

Let this day of Advent draw you into a fresh view of Christ’s redeeming grace.

Contemplate the journey from the worn wood of a manger to the splintered wood of the cross.

Behold the Lamb of God whom shepherds first saw.

Cradle in your heart the Savior who took away your sins.
Schedule an early morning to watch the sunrise. Peer out into the darkness in the moments before the rays appear and remember what you learned today about dawn. You don’t have to wait until Easter morning to attend a sunrise service.

“No longer will there be anything accursed, but the throne of God and of the Lamb will be in it, and his servants will worship him. They will see his face, and his name will be on their foreheads. And night will be no more. They will need no light of lamp or sun, for the Lord God will be their light, and they will reign forever and ever.” (Rev. 22:3-5)

Now read this: How to turn a complaining heart into a thankful heart

This is an excerpt from the book “Behold: A Christmas Advent Journey” by Christi Gee. Republished with the author’s permission.

Christi Gee is the author of Revival: 6 Steps to Reviving Your Heart and Rebuilding Your Prayer Life and the creator of It’s Reasonable — a series of guided courses designed to help parents and teachers answer kids’ common questions about the Christian faith. Her newest book Behold released just in time for Christmas Advent. Find out more at ChristiGee.com or join Christi on Facebook, Instagram, or Twitter.