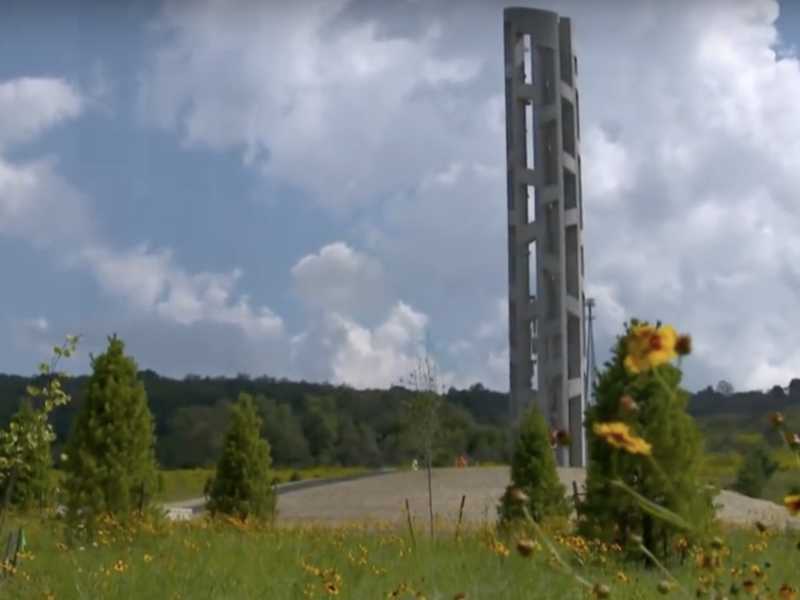 The “Tower of Voices” is a Shanksville, Pennsylvania, monument housing forty wind chimes. According to the US National Park Service, the “intent is to create a set of 40 tones that can signify through consonance the serenity and nobility of the site while also through dissonance recalling the event that consecrated the site.”

“The event that consecrated the site” was the crash of United Flight 93 seventeen years ago. The monument is ninety-three feet tall to commemorate the flight number. The forty wind chimes give voice to the forty passengers and crew who died heroically that day.

Park Superintendent Stephen Clark: “Together their voices will ring out into perpetuity.”

I did an internet search for “9/11” and 269 million results appeared this morning. Seventeen years later, it is still difficult to find words appropriate to the horror of that day.

Many years ago, I stood beneath the Twin Towers and marveled at their magnificent height. It never occurred to me that they could be destroyed. In some ways, it still seems surreal–the jets crashing into the Towers and the Pentagon, the flames, the mass destruction. The heroes of Flight 93 who caused the plane to crash before it could attack the terrorists’ target, presumably the White House or Congress.

We cannot prevent all tragedies, of course. But we can prepare for them.

More than one million people face mandatory evacuation orders as Hurricane Florence nears Category 5 strength this morning. “We are hoping for the best and preparing for the worst,” said Maryland Gov. Larry Hogan.

Christians need to do the same. It is imperative that we begin praying now for those who are facing this catastrophic storm. And that we look for other ways to demonstrate God’s love in our compassion.

“We had nowhere to look but up”

Henri Nouwen: “The many disasters in our world, and all the tragedies that happen to people each day, can easily lead us to despair and convince us that we are the sad victims of circumstances. But Jesus looks at these events in a radically different way. He calls them opportunities to witness!”

That’s why it’s so important for Christians to make public our faith and to build relational bridges over which to share that faith with those in need. When I was a seminary student, I heard of a church that developed ministries for every problem it could identify in its community, then made those ministries known and available to people in need. As a result, it baptized new believers every Sunday for five years.

But there’s a catch.

“A strange affinity for the trained mind”

Oswald Chambers notes that “crises always reveal character.” According to this spiritual genius, “The private relationship of worshiping God is the great essential of fitness. . . . Worship aright in your private relationships, then when God sets you free you will be ready, because in the unseen life which no one saw but God you have become perfectly fit, and when the strain comes you can be relied upon by God.”

Charles Spurgeon warned us, “It is no use going to the Lord’s battle till we are armed with heavenly weapons.” To wage spiritual battle successfully, we must put on the “spiritual armor” of Ephesians 6 before the battle begins.

Do you want to learn more about faith, family, and culture? Sign up for The Campfire today.

This is why Bible study, prayer, private worship, and other spiritual disciplines are so important. When we learn spiritual truth, we gain “ammunition” the Spirit can use when required. Peter studied the Hebrew prophets long before he cited them at Pentecost. Paul studied Greek philosophers long before he quoted them at Mars Hill.

On occasion, the Holy Spirit can give us new thoughts and ideas. These almost always build off biblical revelation and previous experience. But even if they are new thoughts for a new moment, this is the exception rather than the rule. Assuming that God will do this rather than paying the price of preparation is the sin of presumption.

A wise mentor once told me, “The Holy Spirit has a strange affinity for the trained mind.” As with an athlete, a physician, an attorney, a musician, or someone in any profession, the more prepared we are, the more useful we are.

Jesus is on trial today. Satan is the prosecutor; the Holy Spirit is the defense attorney; the lost world is the jury. You and I are witnesses called to the stand by the Holy Spirit when our testimony is relevant to his strategy for winning the world to Christ.

It is urgent that we be ready every day because we never know when a “normal” day will turn into one we’ll never forget.

Stanley Praimnath was an executive with Fuji Bank working on the eighty-first floor of the South Tower (World Trade Center 2) when United Airlines Flight 175 flew into his building. The jet’s left wing sliced through his office and lodged in a door twenty feet from him.

He was able to escape his office with the help of a man fleeing from the eighty-fourth floor. Together they made their way down the stairwell and out of the building. After they walked two blocks from the South Tower, it collapsed.

Praimnath says, “I still have the shoes I wore to work that day. The soles are melted and they’re caked in ash. I keep them in a shoebox with the word ‘Deliverance’ written all around it. They’re kind of like my ark, a reminder of God’s presence and the life I owe to him.”

What will you do on this somber day to extend God’s presence to those who need his deliverance?

Join Kirk Cameron in his new online community, The Campfire.