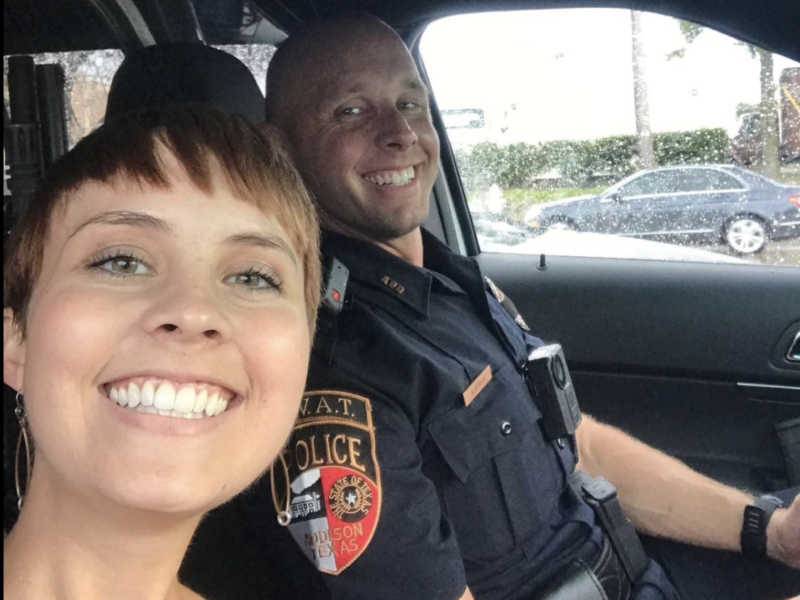 Jenny Newman is only 26-years-old, but she’s faced more adversity than some do in a lifetime.

Jenny is currently battling a rare form of liver cancer. She’s tried chemo three times unsuccessfully. In fact, she’s currently receiving no treatment because none have worked. But instead of rolling over and letting the cancer steal her joy, she’s seizing the day and crossing things off her bucket list. A bucket list that is a little unique.

See, Jenny has always wanted to spend time with the police. She grew up on shows like “CSI” and loved watching the officers solve crimes. So her bucket list includes getting an accurate experience of what it’s like being one of those who protects us.

Last week, a Texas police department obliged. The Addison Police Department, a suburb of Dallas, took Jenny on a day-long ride-along, a birthday surprise orchestrated by a friend.

“I was curious to see what a typical day for a police officer looked like. Did they really run into the crazy situations I’d seen on TV? Or was it all a hoax? What really happens when an arrest is made?” she told KXAS-TV in Dallas.

In addition to the ride-along, Jenny spent time at the gun range with officers. She also got a gourmet meal prepared for her to cap off the day.

The APD shared the experience with a bevy of pictures:

It's always a privilege and honor for APD to help make wishes come true. Jenny is battling cancer and one of her bucket…

Posted by Town of Addison Police Department on Monday, July 10, 2017

Of the cancer, Newman said she was 20 and attending Texas Christian University in 2012 when she was diagnosed with fibrolamellar hepatocellular carcinoma, a rare form of liver cancer that shows up in adolescents and young adults who have no history of liver disease. In the last five years, she’s tried chemotherapy three times, including two clinical trials, and has also endured six surgeries to remove tumors or to remedy other complications from the cancer. The most recent surgery was last February.

Besides tackling her bucket list, Jenny’s also not sitting back and letting the cancer control her life. She’s received both a Bachelor’s and a Master’s degree all while battling the cancer.

She’s also a person of strong faith. On her CaringBridge site, a journal for people battling various diseases, she expresses her hope in the Lord.

“God is taking care of me and I know with His strength and guidance I will beat FHC,” she writes. “For those familiar with the poem ‘Footprints in the Sand,’ you understand the reason I chose this site background. For those that don’t know the poem, I recommend reading it. “‘When you saw only one set of footprints, it was then that I carried you.'”