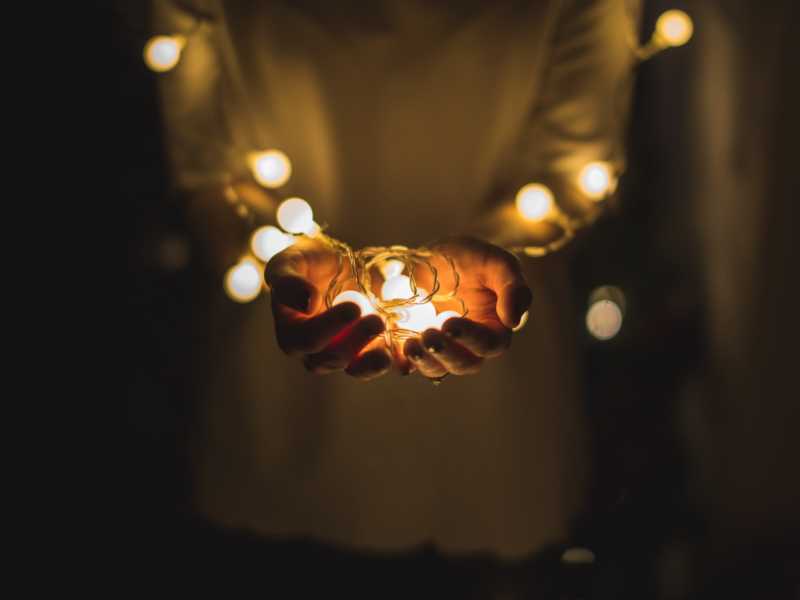 Every single day it seems like the darkness creeps just a little further in.

As a U.S. citizen, I am overwhelmed watching the fabric of my nation fray and disintegrate, but the violence and evil reach far beyond our borders, I know.

The well-loved children’s song announces, “This little light of mine. I’m gonna let it shine.”

The enemy would have us believe our tiny little candle can’t hold a candle to the heavy sulphur-laden blackness that is wrapping its tentacles around our world.

But that’s a lie.

The truth is that as believers, our light comes from THE Light and greater — dear friends — greater is He that is in us than he that is in the world. (1 John 4:4)

Think about how the beginning began (Gen. 1).
Darkness was over the earth.
Until.
Until God spoke.
He spoke, and there was light.
And it was GOOD.
And God separated the light from the darkness.

The One who lights our hearts is the one who brought light from absolute darkness. He CREATED light. There is no darkness HIS light cannot drive out. We were made for such a time as this.

This is no small thing and not a coincidental connection: Light shines brightest against the darkness. And when light shines, others SEE.

Jesus called us light. He said we were a city on a hill. (Matt. 5:14-16)
God has placed His all-powerful LIGHT within the lives of His people. Until Jesus returns to take us home, we are the light-bearers for such a time as this.

This is our time, dear Christian friend.

The stage has been set for Christ’s followers to step up and show up.

With our words and actions declare we choose LOVE and LIGHT and LIFE, especially against the backdrop of despair and darkness and death. Paul calls out the deceiver, saying he has “blinded the minds of the unbelievers, to keep them from seeing the light of the gospel of the glory of Christ.” (2 Cor. 4:4)

There’s a world full of blind unbelievers out there who need our little lights to shine. They need us to look different and react differently and cause them to ask, “Why?”

But equally so, there’s a battalion of weary warriors who believe but are battling discouragement. They sit on the sidelines with only a flicker, hoping someone will fan the flame so their cold hearts will beat with warm passion again.

We need each other: Lights on, eyes open, love glowing.

Paul opens his letter to the Ephesian believers by praying they would have the eyes of their hearts enlightened, so they would know what is the hope to which God had called them. (Eph. 1:18)

He also spoke of eyes that could see the unseen — the eternal. And with those eternal eyes, he could call the persecution, afflictions, and crushing blows “light momentary affliction,” noting he did not lose heart. (2 Cor. 4:17-18)

We may each just be one candle, dear friends, but together we can light up this dark night for those who follow us on social media, who take our money as we shop or dine, or who simply cross our paths in a hundred different ways today.

I want to be the light on a stand, not the one under a bushel.
This little light of mine. I’m gonna let it shine. Are you with me?

“For God, who said,
‘Let light shine out of darkness,’
has shone in our hearts
to give the light of the knowledge
of the glory of God in the face of Jesus Christ.”
(2 Cor. 4:6)

This post originally appeared on ChristiGee.com and was republished with permission.